What a little gem. Arriving anywhere to a beautiful sunny day always helps and Sarajevo was no different.

The Airport was pretty small and easy to get in and out of but the best part was the scenery, green mountains surrounded the airport with terra-cotta coloured roofs dotting the landscape. 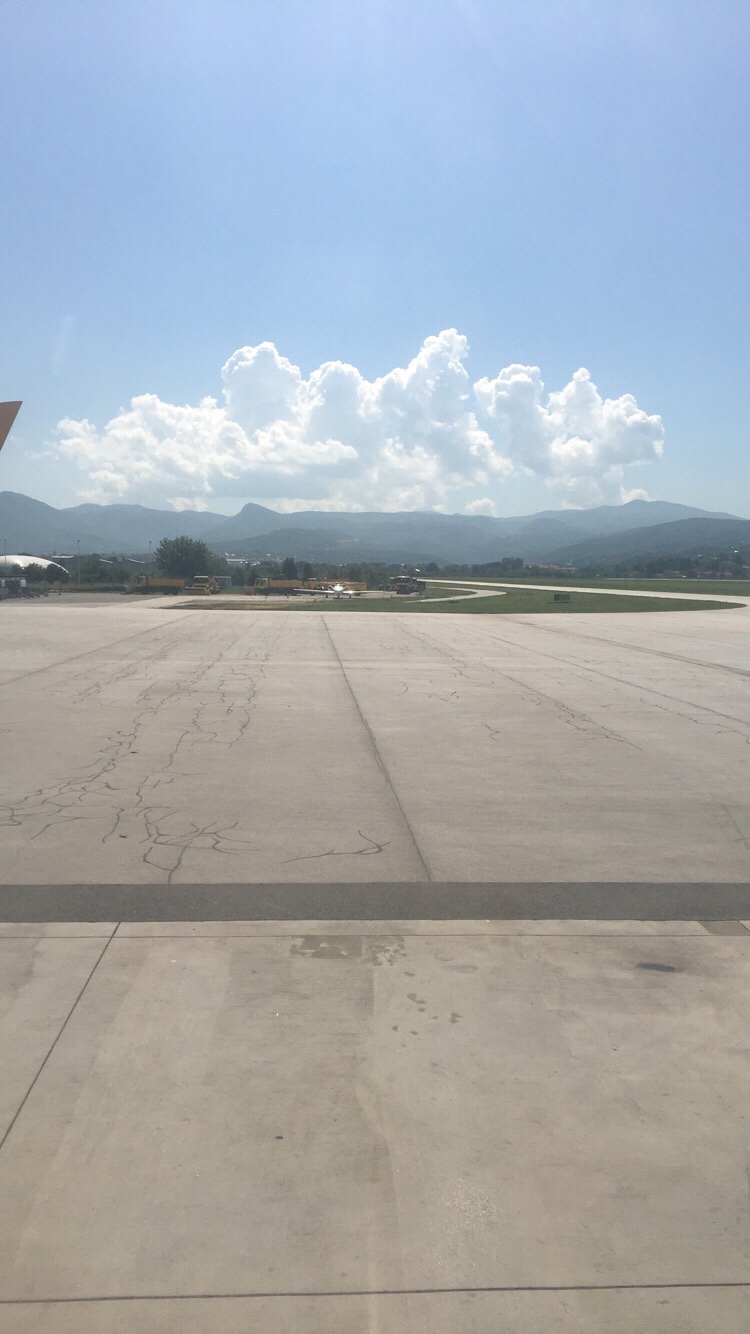 My research had shown that public transport wasn’t great from the airport and that taxi drivers might try overcharge you. However, there was a bus that went from the airport to the city Centre for just 5KM and although infrequent, the next one left an hour after my arrival so I waited and basked in the sun until it arrived.

The bus driver was friendly and helpful too which is always a good sign I think. The scenery started off similar to that at the airport but as we got closer to the the town I noticed a lot of older buildings, many of which had old bullet holes in them. Most of the holes weren’t covered and the buildings still being used. A stark reminder of the war torn history of the area.

Regardless the city had a nice charm to it and as we got closer tot he old town area I was getting more and more excited about exploring this picturesque area.

Most of the things I’d ear marked to check out on my little trip were near the old town area so I started by walking down by the river and multiple bridges to the Latin Bridge, the famous location of the assignation of Franz Ferdinand and his wife which led to the start of the First World War. There was a little museum beside the bridge too so I checked that out while I was there.

I had read a story about a man who wouldn’t give up his house that was in the way when they were building city hall but he eventually agreed if they gave him a bag of gold and agreed to move his house brick by brick from one side of the river to the other. They did, and the house is still there today with a little restaurant for good measure. I wanted to try the local dish of Cavapi so I l thought the ‘house of spite’, as it was known was as good as any. 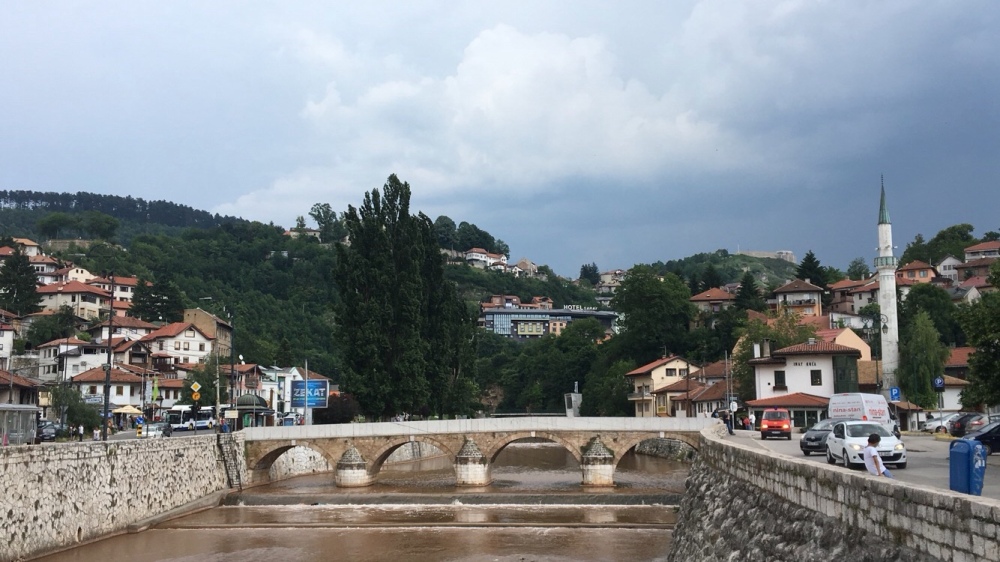 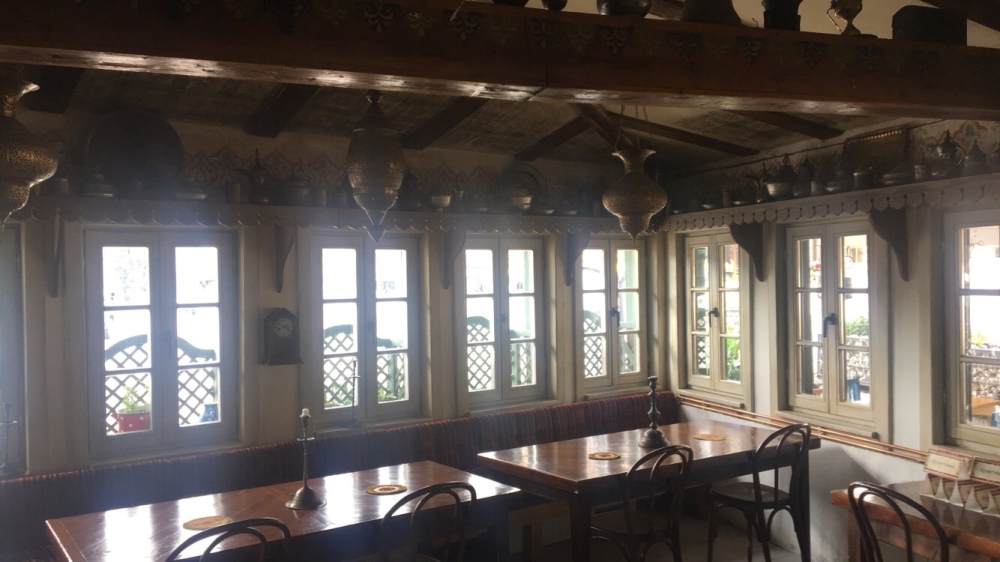 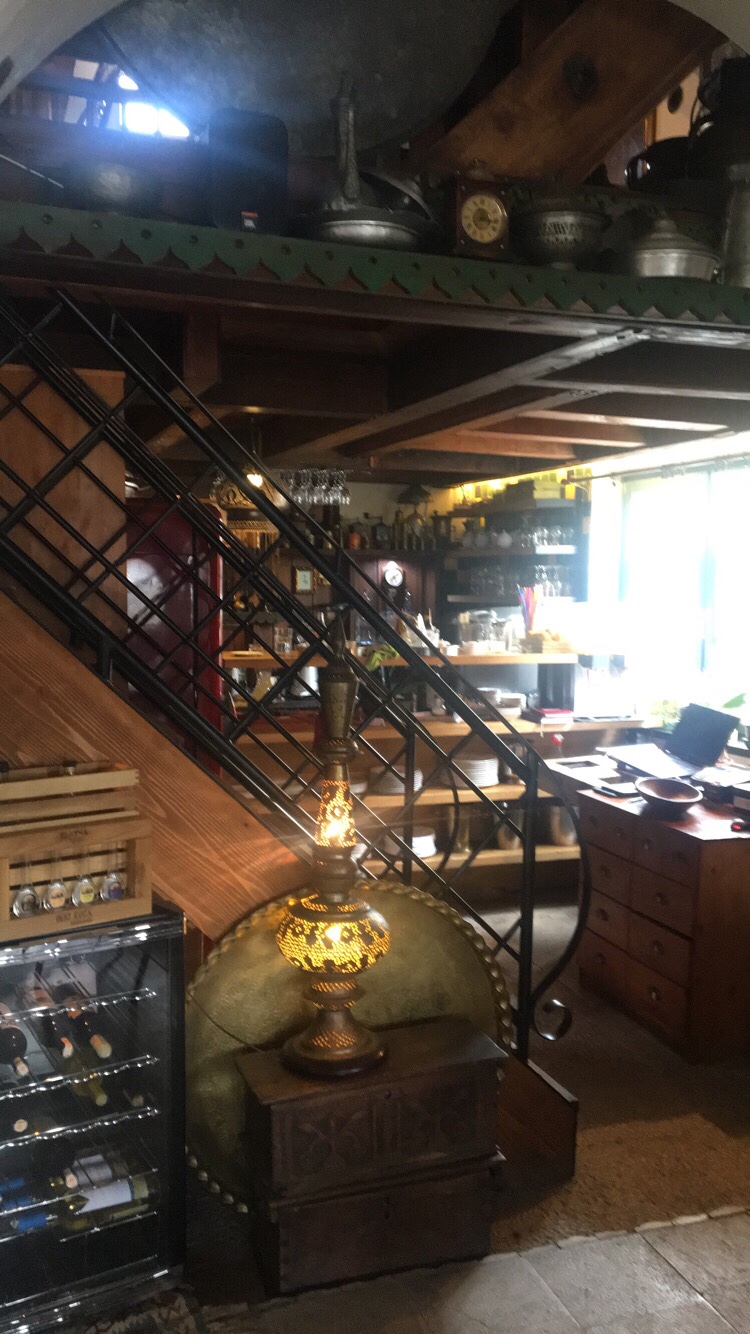 As I sat there, a storm rolled in out of nowhere. Lightning and thunder followed each other in close succession and then the heavy rain poured down. It was a bit of a change from this morning and I was in a T-shirt and so I no intention of of leaving my sheltered terrace restaurant seat until it passed. I got a local Bosnian coffee to pass the time. It came with a nice piece of Turkish delight (lokum) but the coffee was too heavy for me. 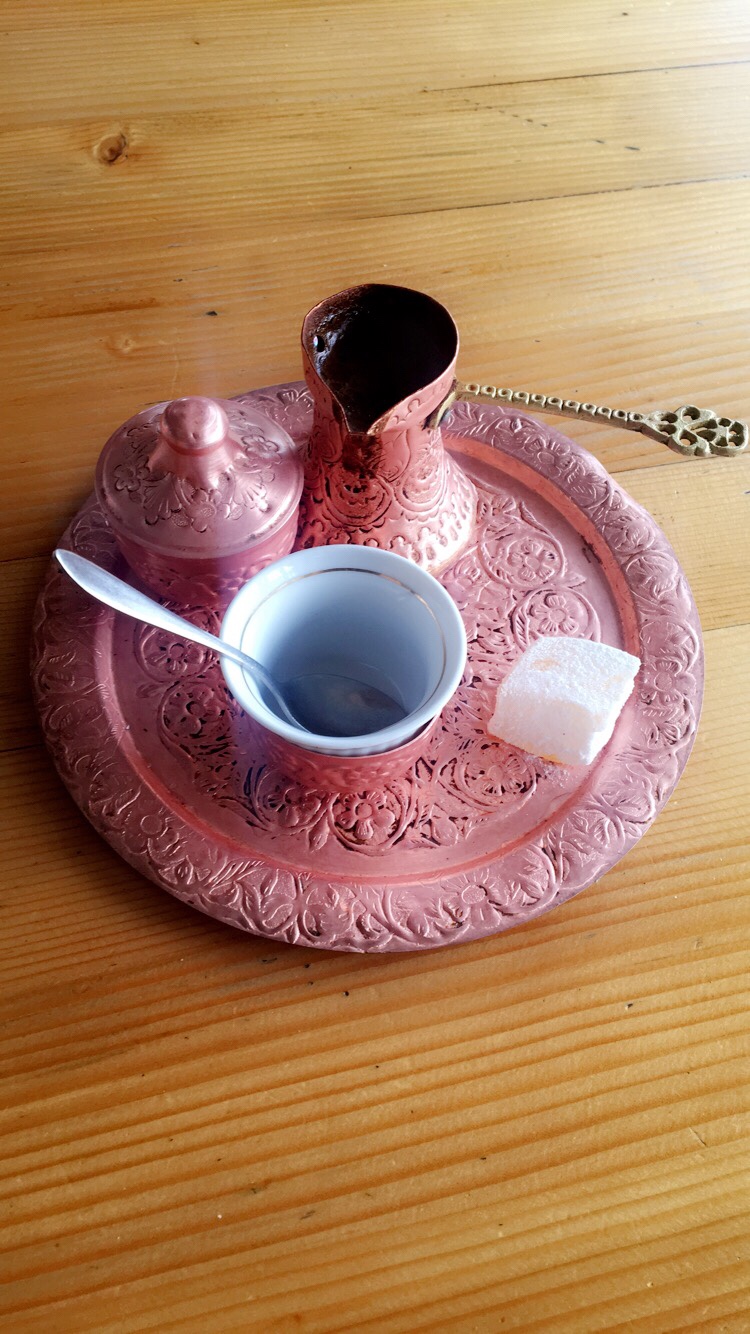 When the rain eased off to a drizzle I went back to my hostel to grab a sweater as there was a walking tour on later that I wanted to do but didn’t want to be too cold if the weather turned bad again. As I was relaxing in the hostel, waiting for the time of the tour to come around. Another flash of lighting and thunder, the biggest and quickest yet, snapped overhead. At the same time I heard a little yelp from reception, I had earphones in so I wasn’t sure if they were calling me or what so I just carried on but later that evening when I was in the common room before going to bed, the receptionist came in for a chat as it was pretty quiet. It turns out she has a fear of thunder and that’s what the screech was when the thunder struck earlier haha

Anyway as it came near to the walking tour time I headed down to the meeting point but nobody turned up, I’m guessing that maybe this was because of th bad weathered, part of me figured it might happen so I just went exploring again on my own. I went up to the yellow pavilion to get a view of the area 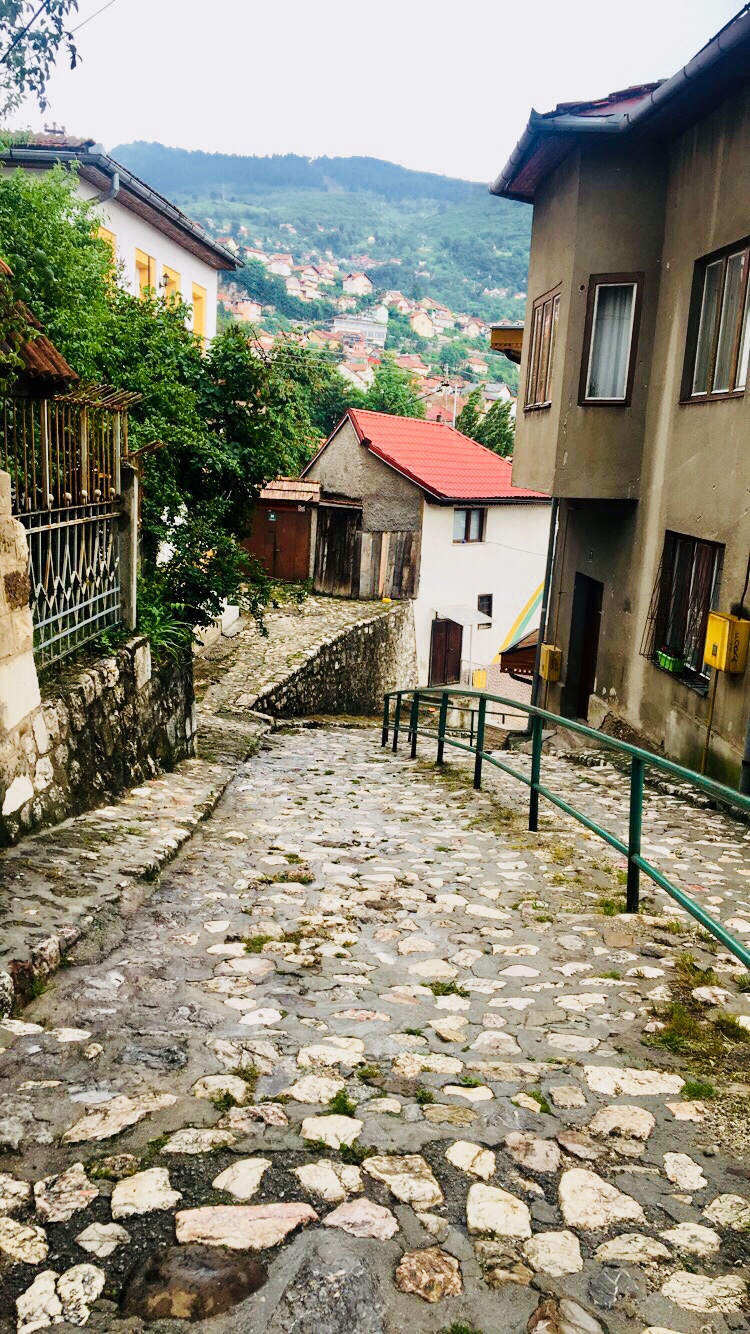 before going to the cable car where the best views of all were. The cable cars themselves were brand new but the overall area/ buildings around them clearly weren’t finished yet so when you get to the top you have to walk a bit away from what looks like a building site before you get the nice views… the clouds were still lingering at this stage from the storm earlier but I can only imagine what it would have looked like on a clear day 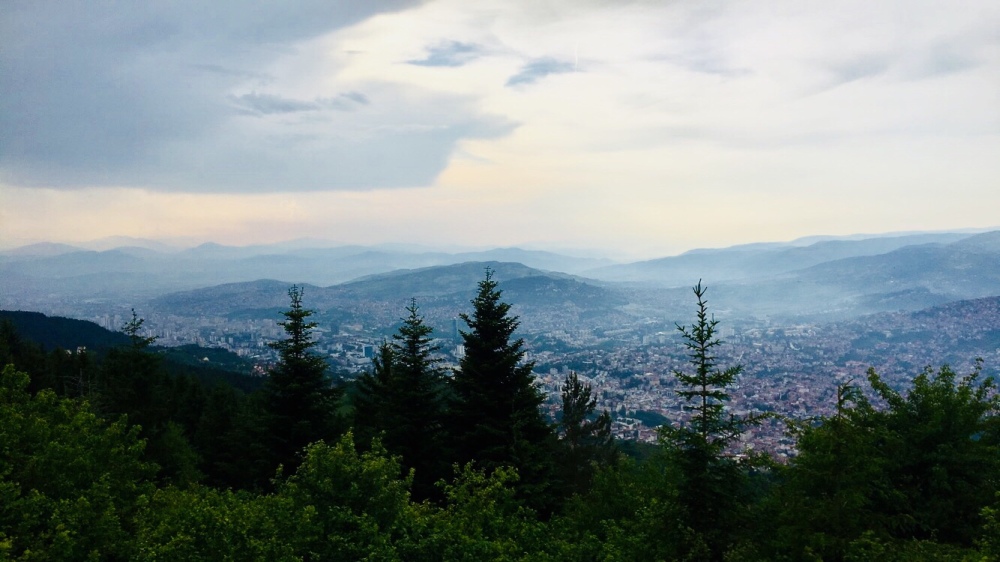 When I came back down I strolled around bascarsija and lagavina areas which were full of little souvenir shops, quirky cafes, bars and restaurants. Really nice vibe around here and I had a look at Gasi Husrev Bey Mosque before grabbing dinner in a traditional restaurant called nanina kuhinja. I got a traditional meal called sarajevski Sagan, which was basically various vegetables stuffed with mince meat, it was tasty.

After that I just went back to the hostel to relax before bed. I had got barely any sleep the night before so I was looking forward to an early night, although it was Friday and the area had a lot of cool bars so maybe on another visit I’d get to check them out.

Tips and prices (all in KM)

Sometimes people quote euros not KM, so just be aware of this Incase get confused (euro is 1/2 KM)

Things I didn’t get to do because timing didn’t work but highly recommended for trips to Sarajevo:

Olympic Bobsleigh and luge track from the Sarajevo, Yugoslavian Olympics

And… Mostar, I never heard of Mostar before I booked my flight to Sarajevo but as soon as I told people about it all I would hear was Mostar Mostar Mostar… Unfortunately I didn’t have the time to go but it’s number 1 on the list for when ever I come back.

Any time you need to get a taxi do your best to find out what price it should be before going to taxi because taxis will try trick you.

Taxi ordered from hostel only 15KM and that was from exact same location.

Cable car 20 KM or euro?? return journey expensive but nice view, debatable whether it’s worth that much though.