I got the overnight bus from Siem Reap using the Giant Ibis bus company (the most reliable I could find from research). The only problem with it being quicker (1 and a half hours less than expected) is that I arrived at 5am and didn’t really have anywhere to go. So I went for a walk along the promenade and just sat on a bench to pass the time as the night started to turn into day. The promenade was packed with loads of people exercising, even at 5am! 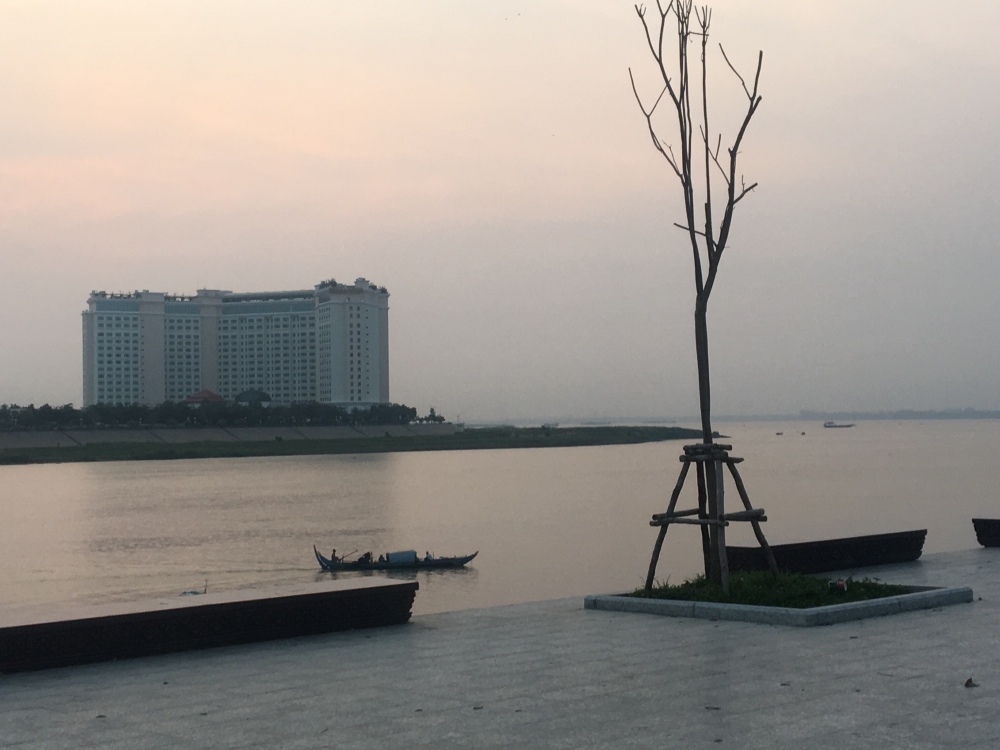 My hostel was near the promenade so at a reasonable time, I brought my bag to the hostel, dropped it off and went for a stroll around. I earmarked a couple of places while I was sitting on the promenade benches. First, I checked out Wat Phnom, which is apparently how the city got its name, before walking to some indoor markets, where you could buy anything from a hairbrush to car parts to jewellery. After this, I walked towards the Olympic Stadium but decided to ask a tuk-tuk man along the way how much it was to go to the killing fields and back. He quoted me 15 dollars, which was about 5-10  dollars less than what I had expected so I decided to go with him and pointed the Olympic stadium out to him as we passed, as a drop-off point for my way back. win-win. 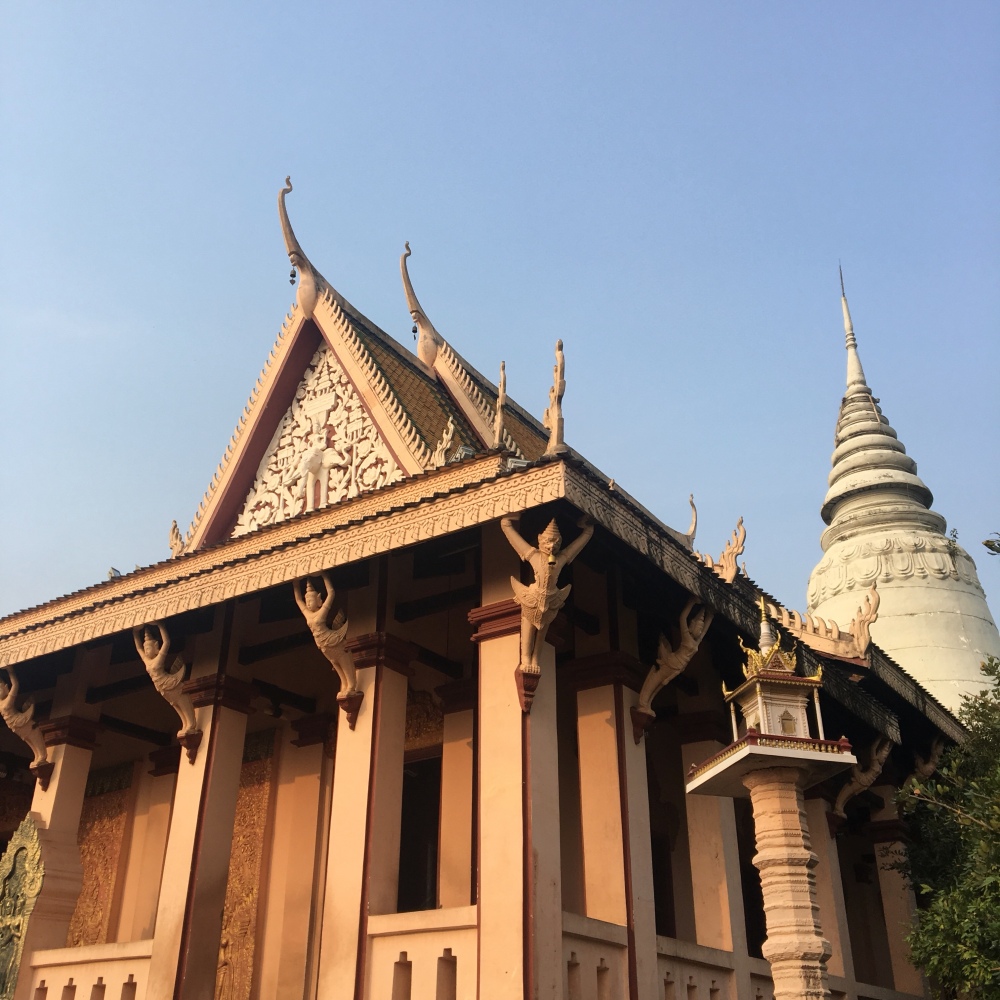 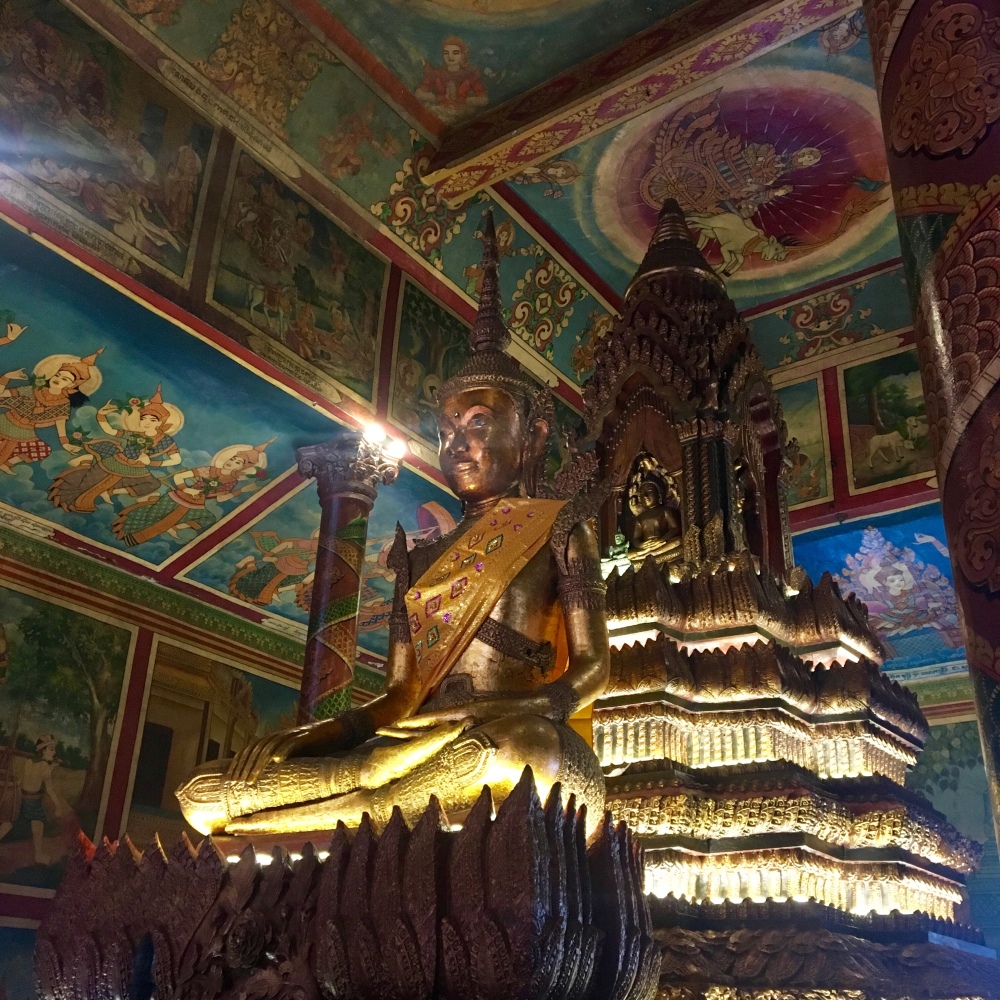 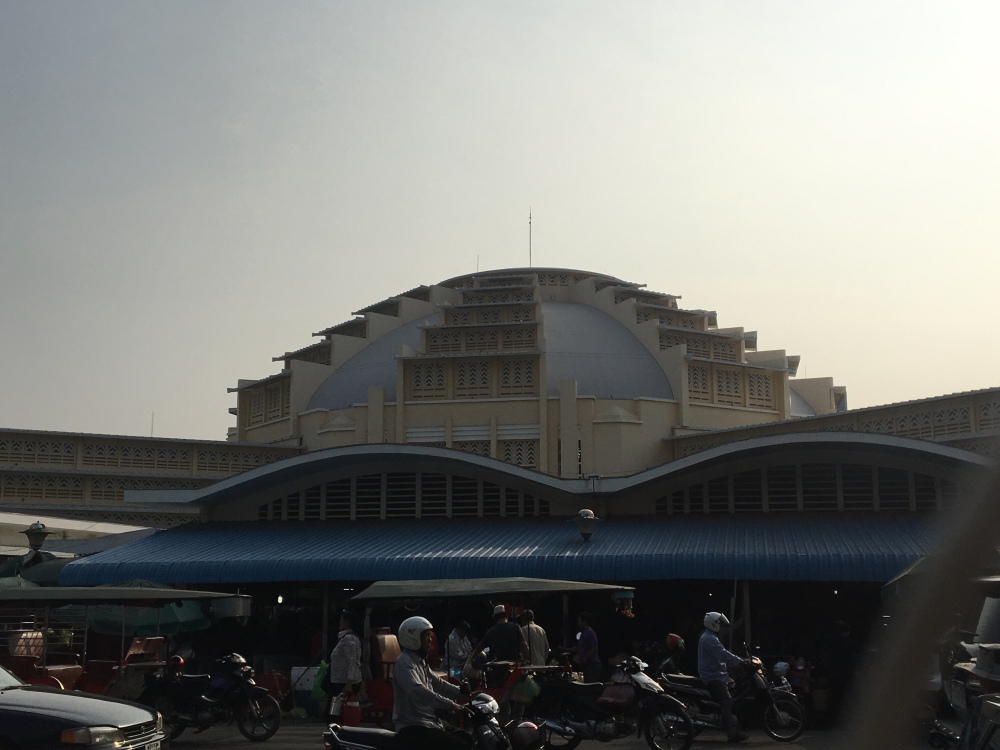 The killing fields (Choeung Ek), really was an experience I’ll never forget, walking around and listening to stories on the audio tapes to the point where you are being told that the Khmer Rouge thought that bullets were too valuable to waste on people so that they were killed by any other means like pickaxes or even the evidence pointing to the fact that some children had been beaten to death off a tree, known as ‘the killing tree’. The truly astonishing part of it all is this memorial is only one of over 300 known killing fields in the country. The Khmer Rouge saw the death of approximately 3 million people in under 4 years. An incredibly scary statistic. 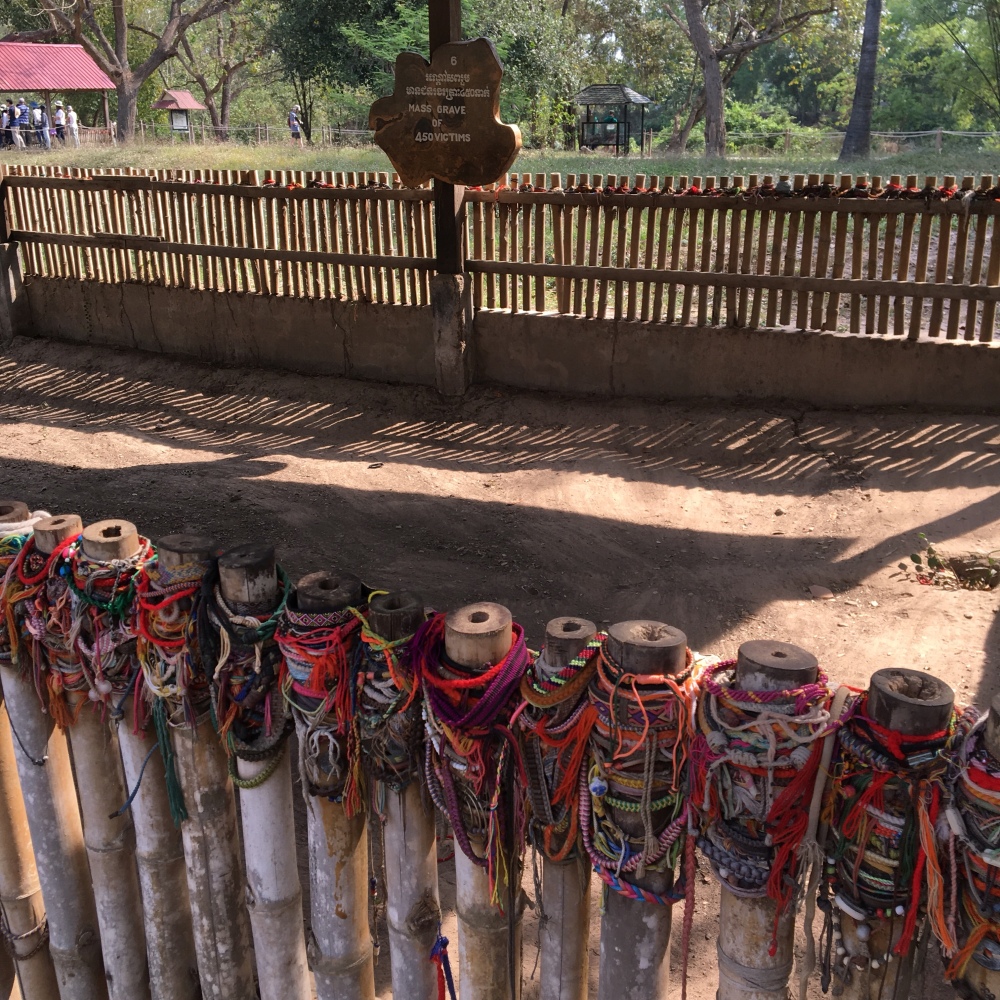 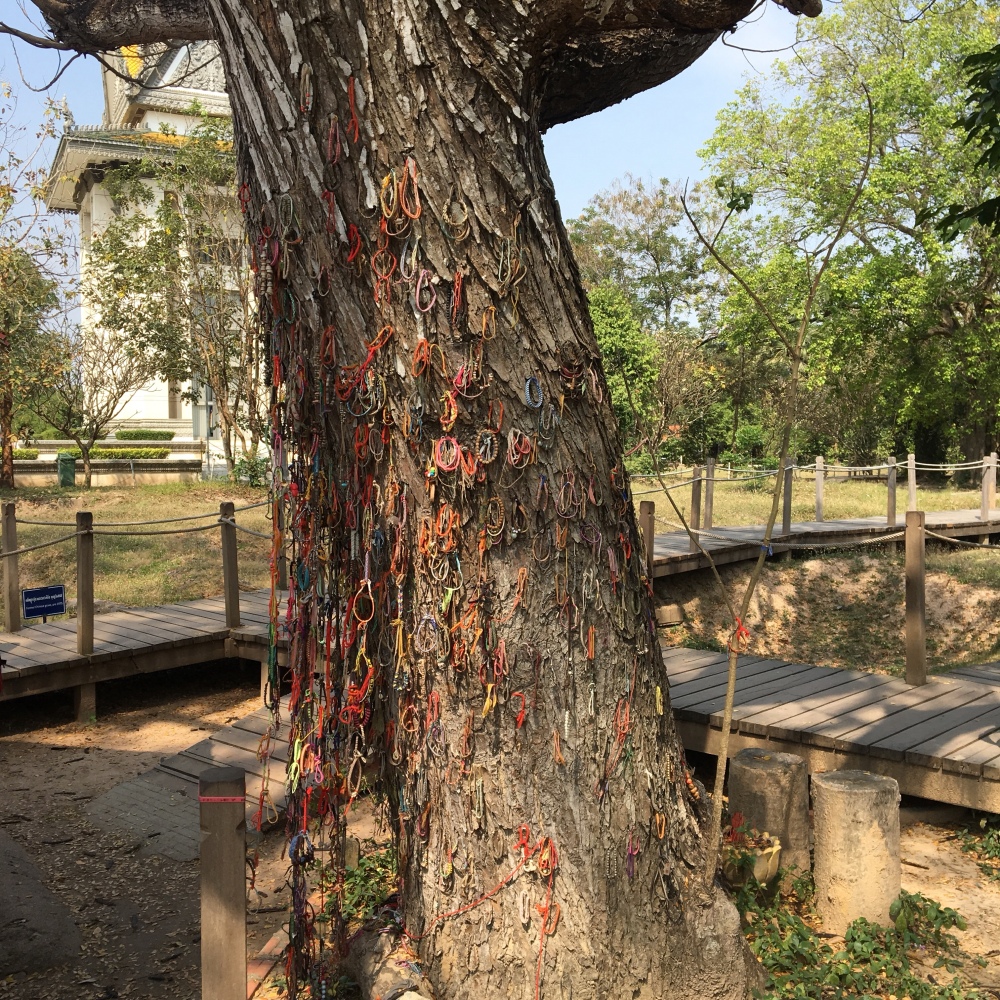 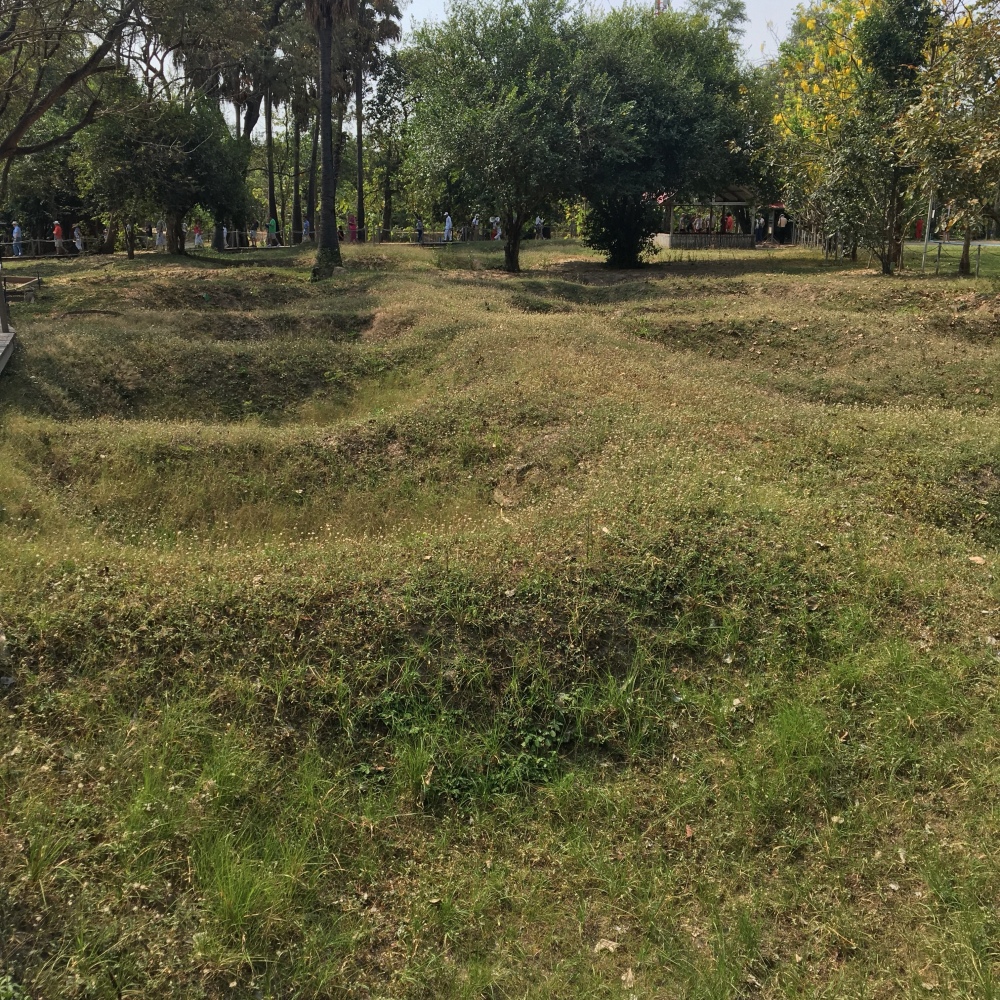 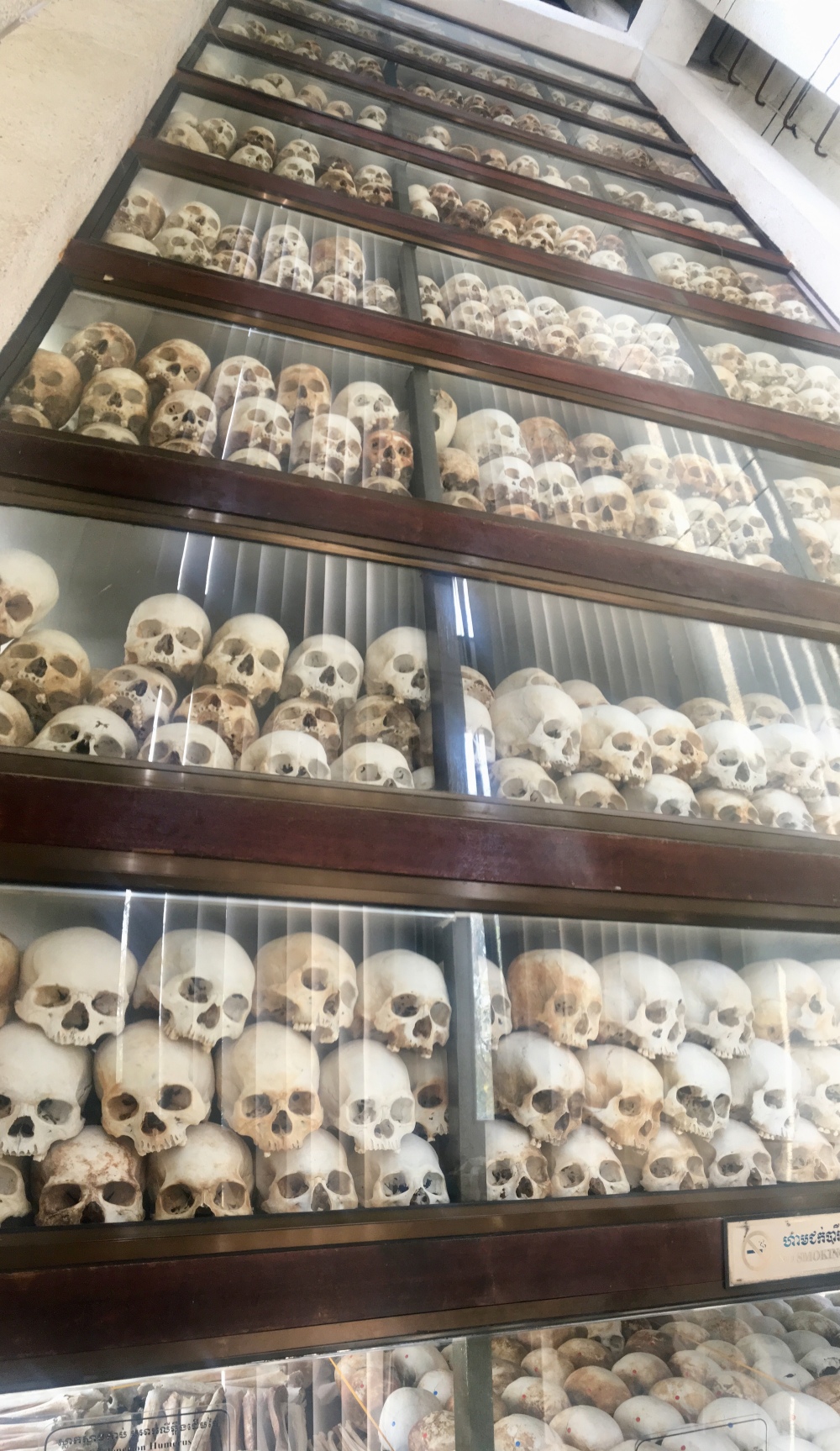 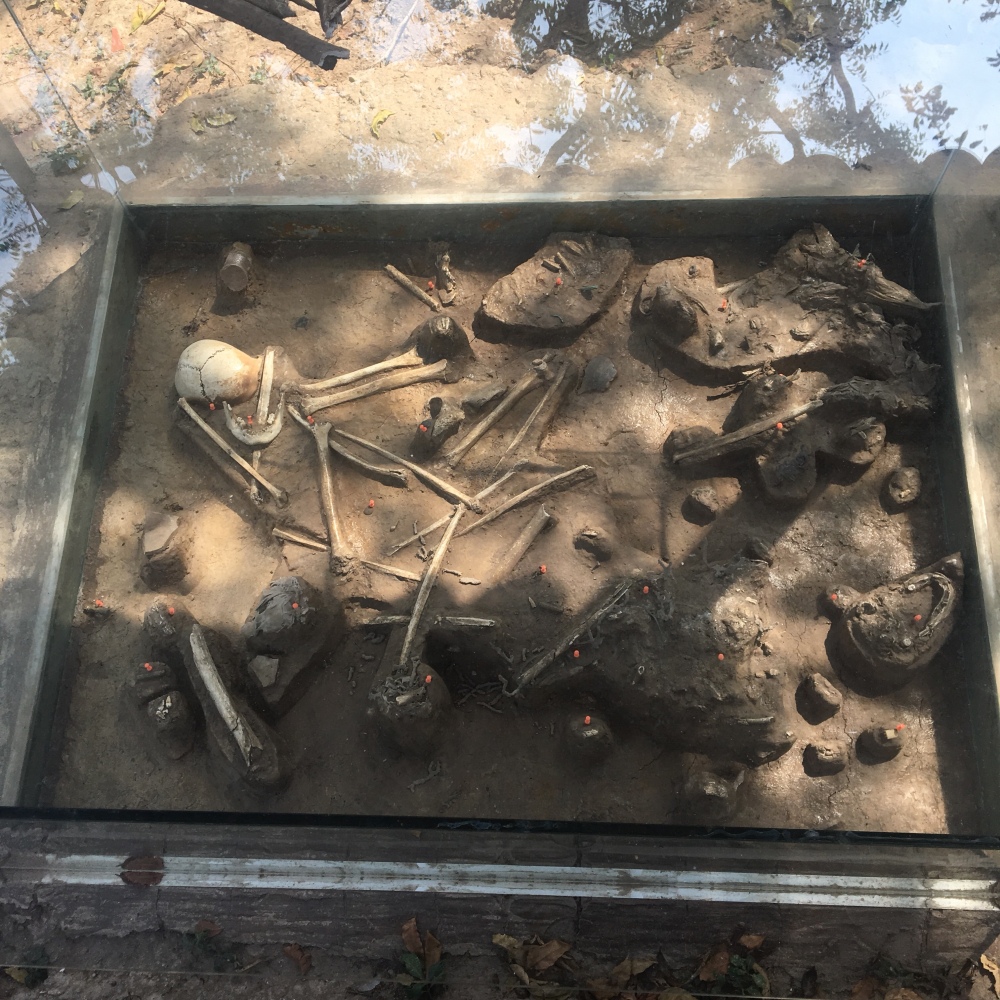 After the killing fields, I got dropped off at the Olympic Stadium just to check out the architecture. It was built with the Khmer Rouge communistic mindset and was free to enter so I sat in the main stand and took it all in for a few minutes.

Afterwards, I walked to the S-21 Prison (Tuol Sleng Genocide Museum) which was a secret prison during the Khmer Rouge rule. It is estimated that approximately 20,000 people were tortured and killed here, as they were assumed to be spies. Similar to the killing fields, this was only 1 of 167 secret prisons known around the country. The last 14 people killed here, were found on site and buried here. Again, the audio tapes provide a huge amount of detail into the pain and suffering caused here. There is even record of one Australian man who was imprisoned after he mistaken sailed into Cambodian waters while travelling the world. His documents show that he listed Conolel Sanders (Yes, the KFC man) as his CIA contact, and gave his home telephone number as his CIA correspondent address. It was basically a situation that you were tortured until you gave them what they wanted, regardless of if you had the information or not, and then they killed you anyway. Barbed wire was even installed along the top floors of the prison balcony halls to stop prisoners committing suicide. 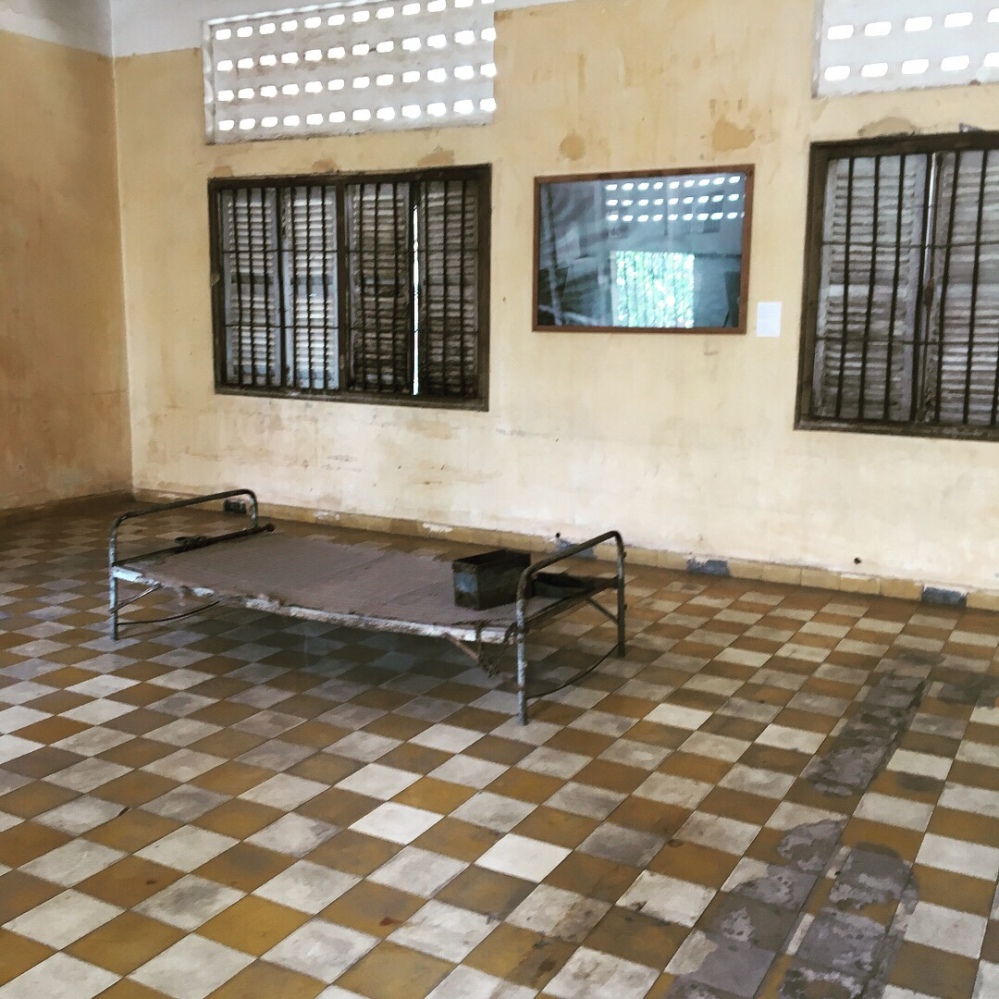 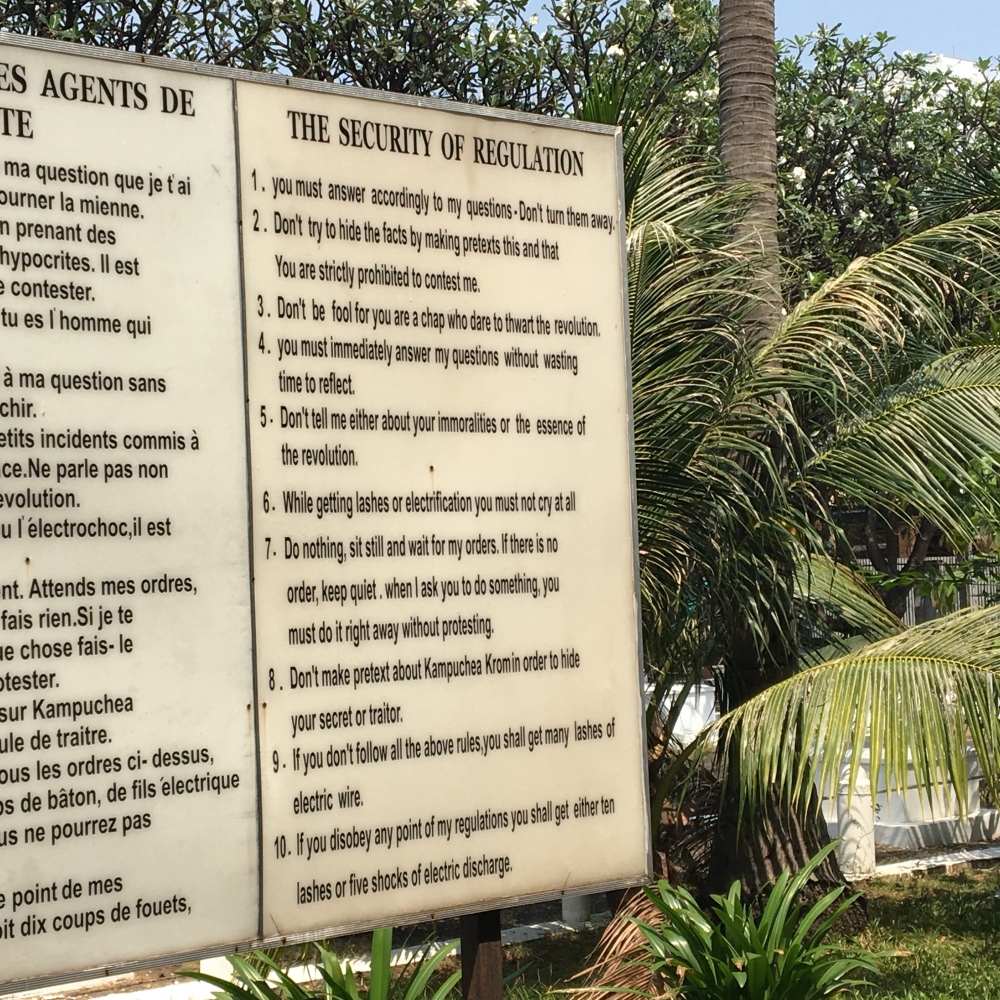 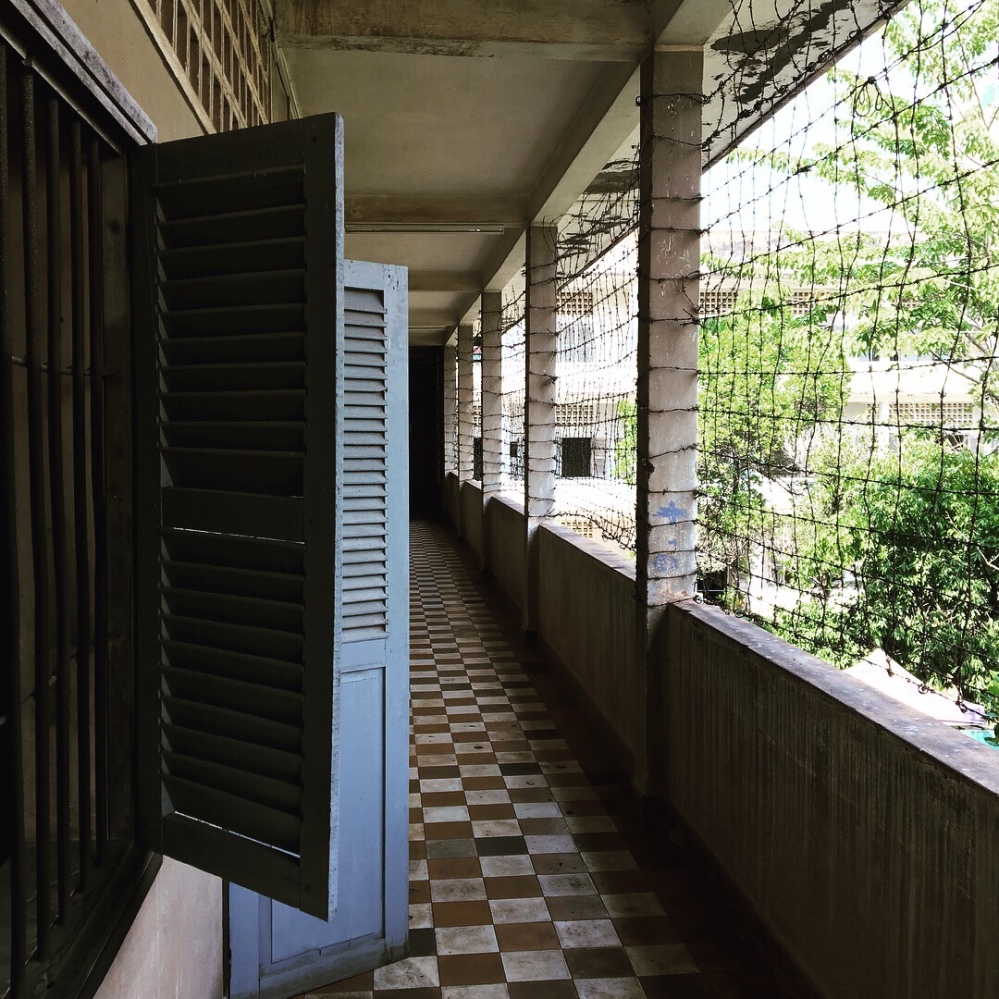 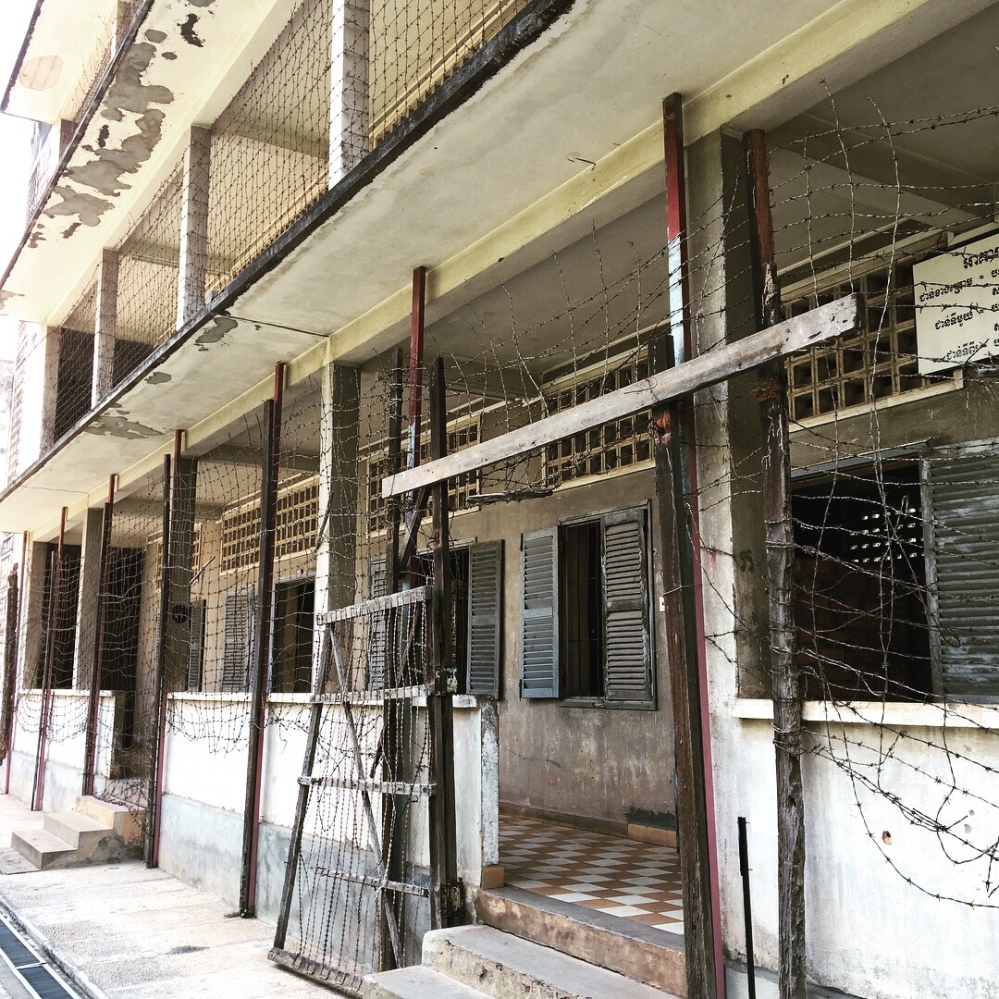 That evening I decided that I would try and find some good, cheap local food. I wasn’t thinking about another bugs cafe, but still, I wanted to some good local cuisine. I found a place called David’s Restuarant and checked it out. I got some deep fried pork Dumplings, chicken noodles and a beer for about 6 dollars. The place was busy, I think I wasn’t the only one to look on Tripadvisor! It was so busy that the waiter even asked if I minded other people sitting at the same table as me (I was on my own taking up a table for 4). 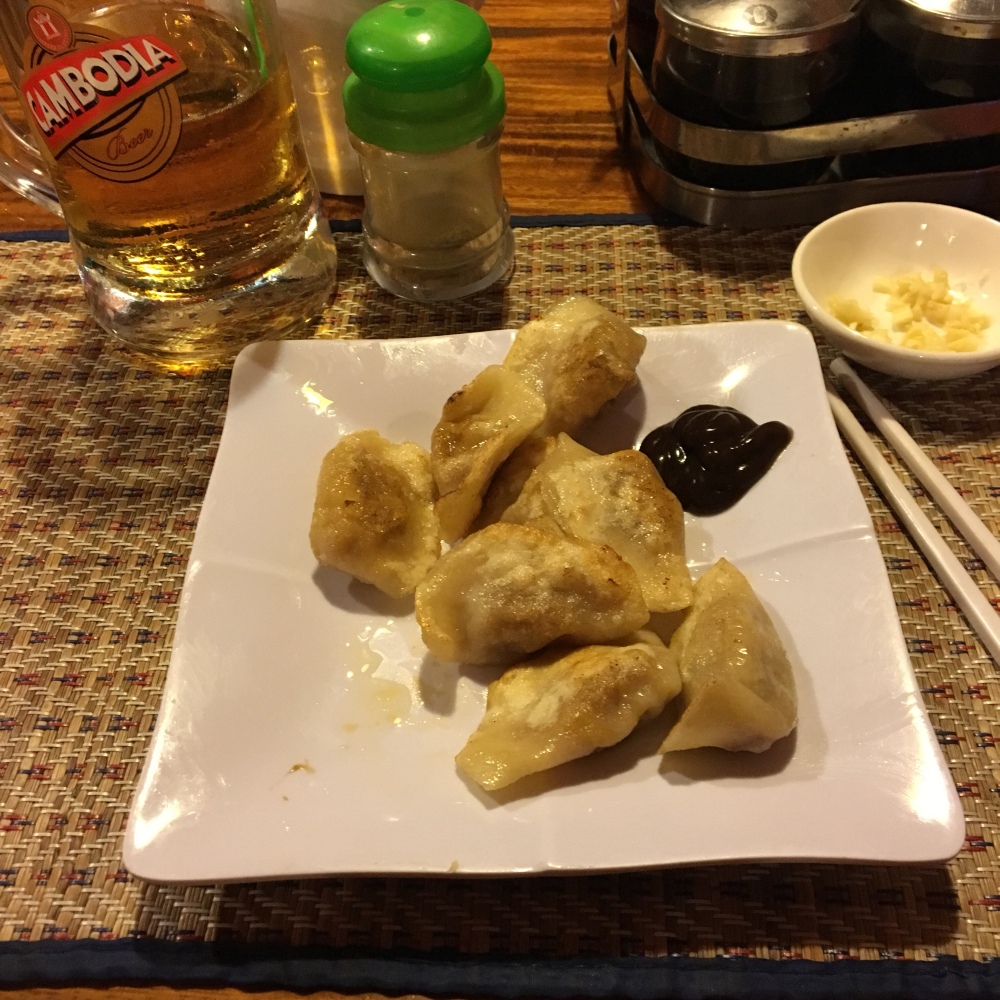 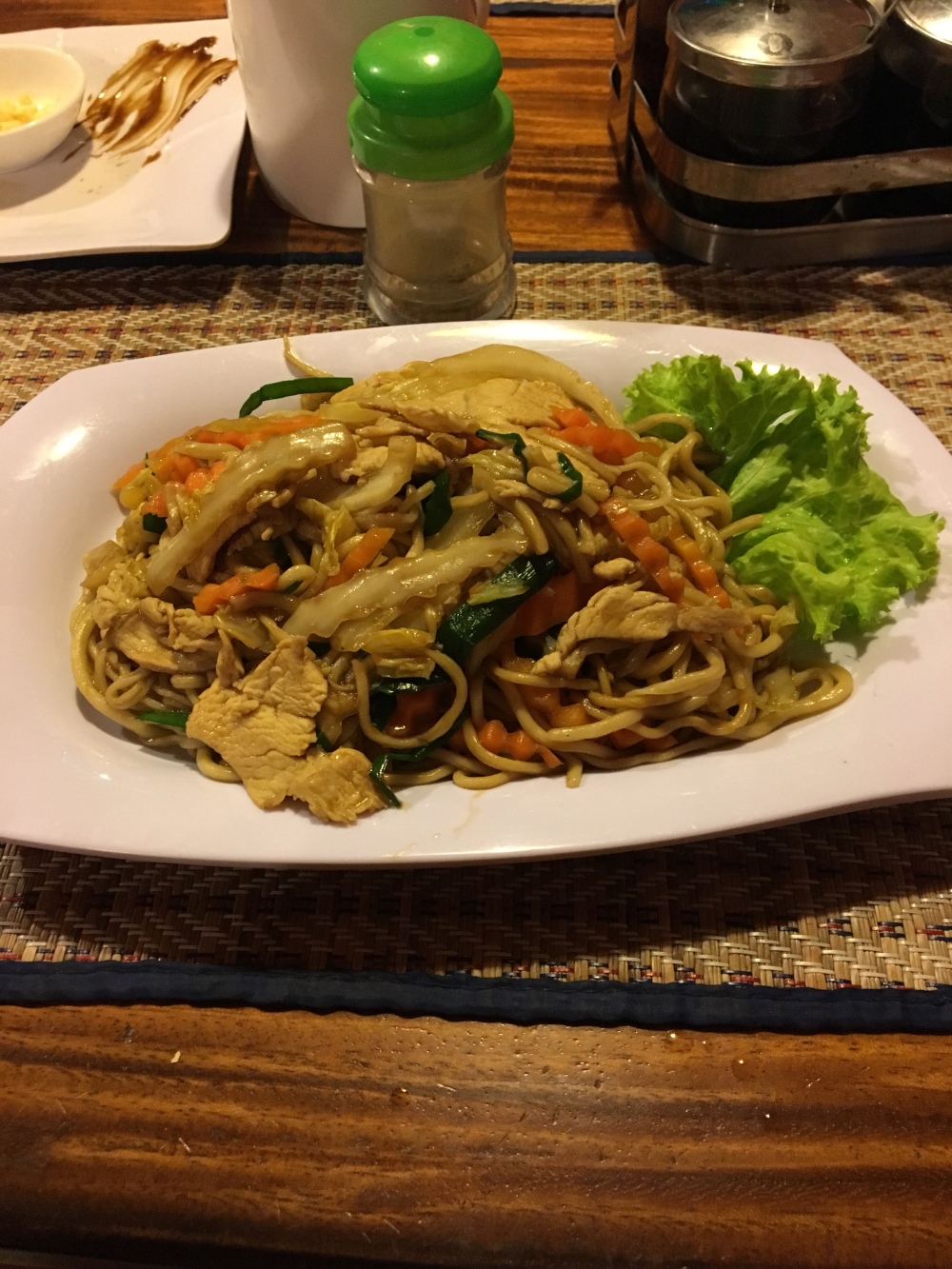 The next day I didn’t have much planned, so I slept in again, before checking out the Royal Palace. I overheard a tour guide saying that the king still lives there but I didn’t see any sign of him anyway!  It was nice to pass some time but not overly amazing for the price tag (over 10 US dollars) considering everything else you can see for less. 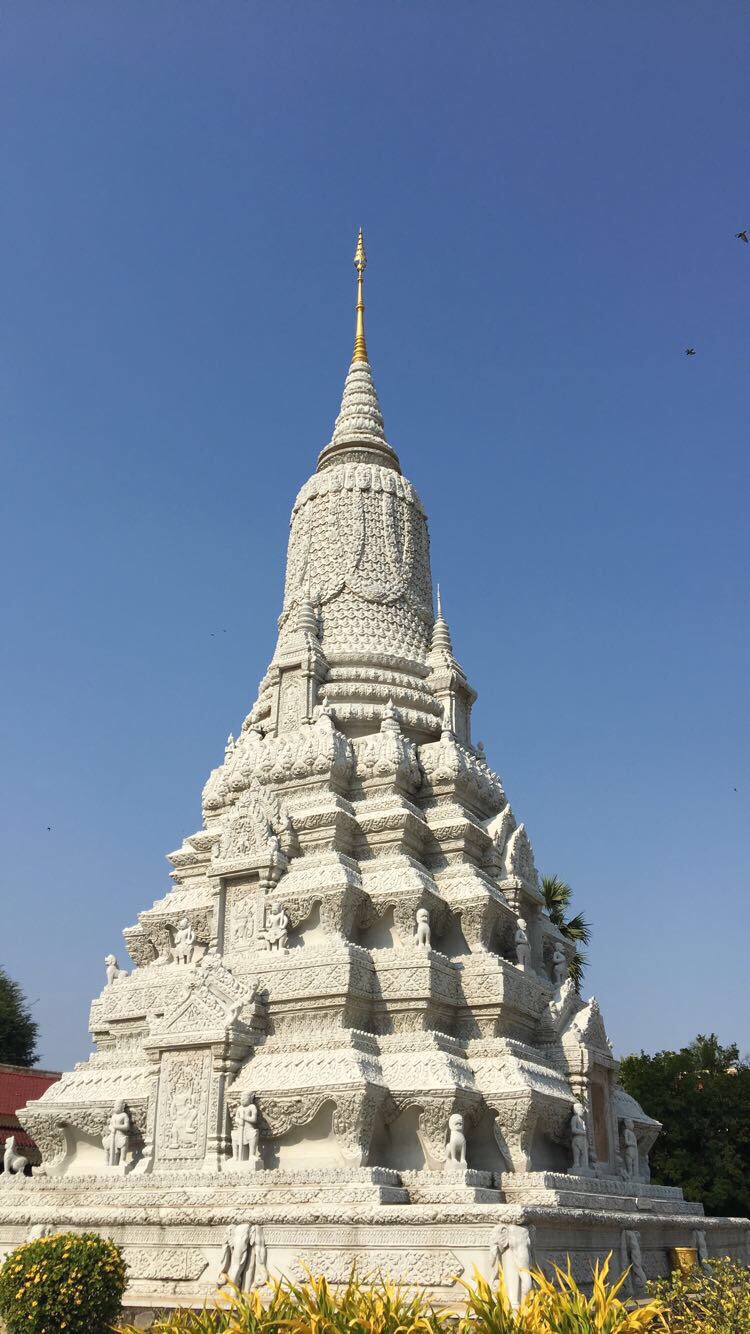 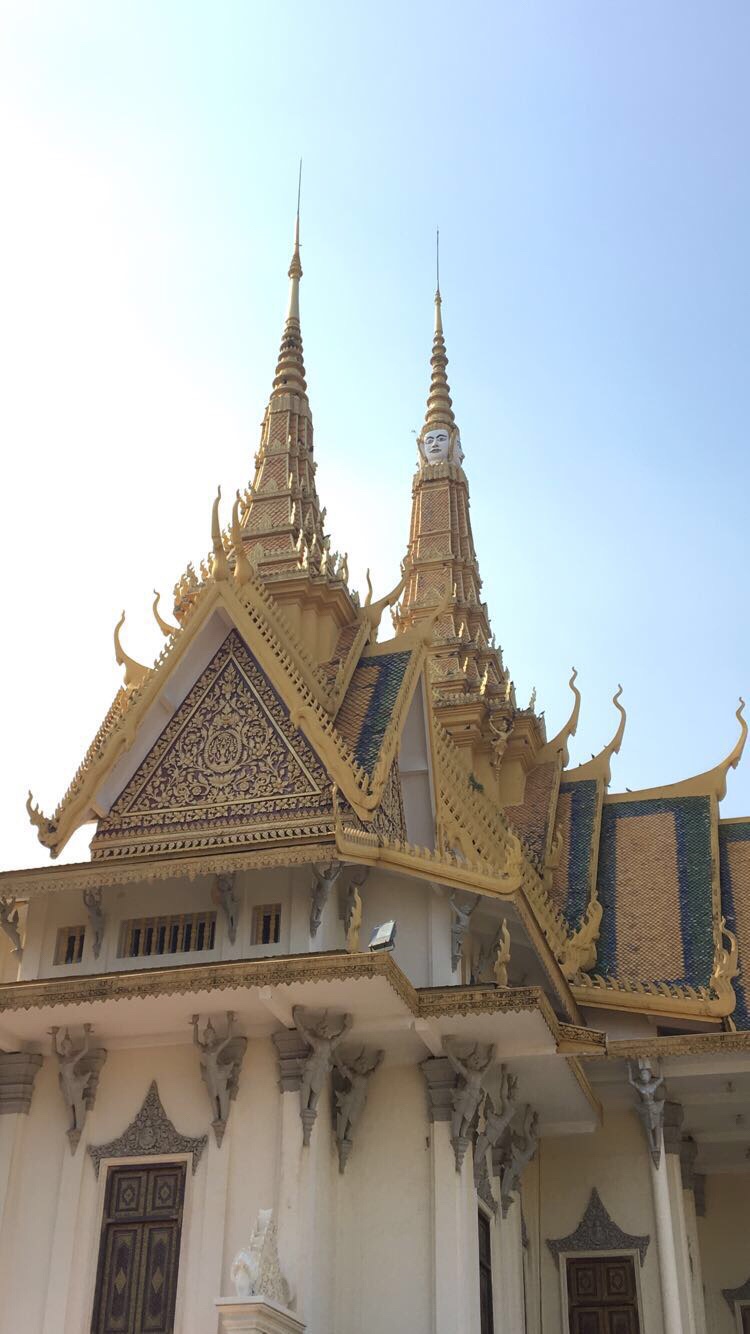 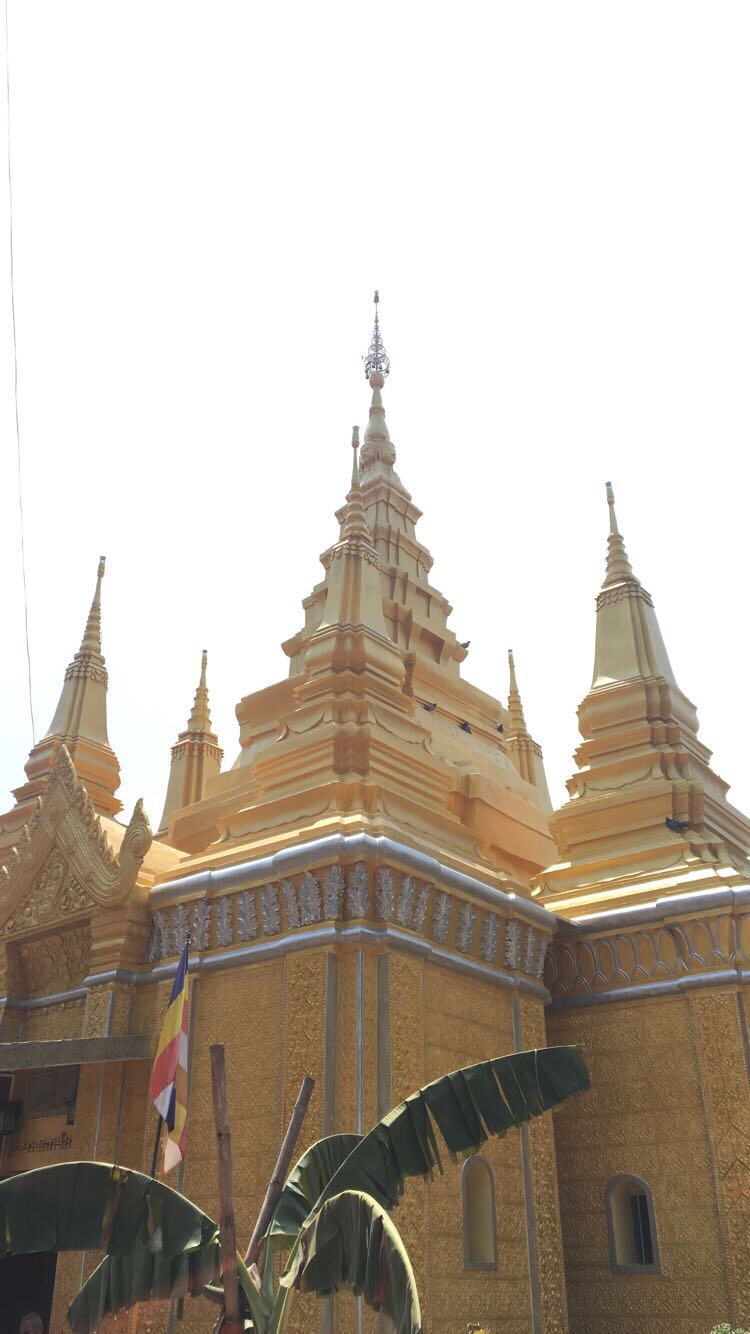 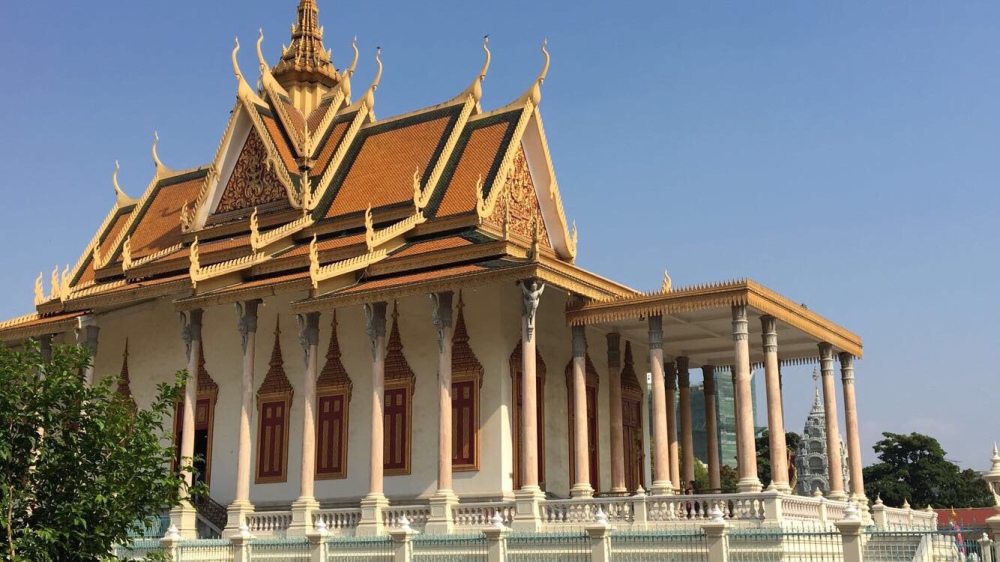 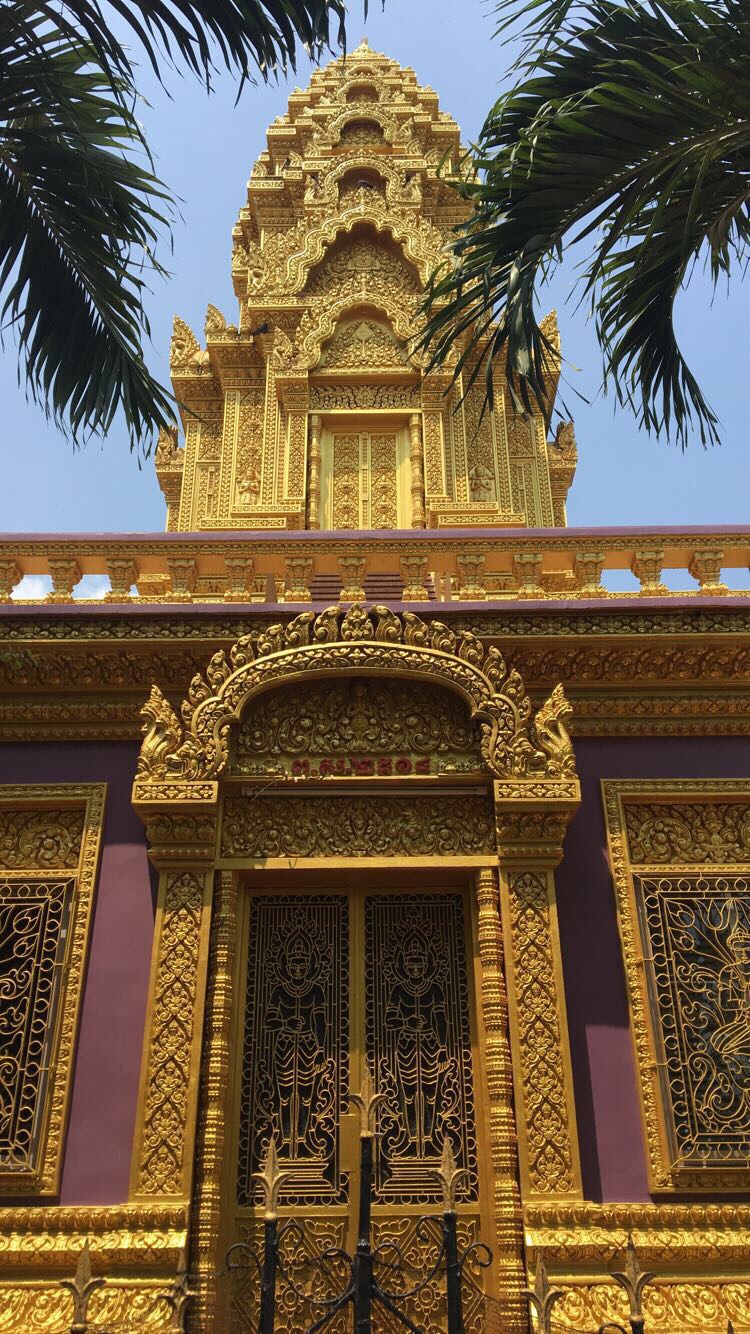 Again as I had time to spare, I thought about checking out other not so famous things to do in the city so I found the ‘Kingdom Brewery’ online. I was going to do a brewery tour but in the end, I didn’t go, it was not worth it from the research I had done and there were conflicting reviews of the price. If it was the 16 dollars that was being quoted, then there are a lot of things to see and do in Cambodia for less. If it was the 7 dollars I seen in some places, then all well and good, but it was a decent distance away and a man only enjoys drinking so much on his own…

So this aside, after the palace I didn’t have any plans and at cents a beer, I decided to rest and enjoy people watching from one of the restaurants along the river.

I could have eaten there but I thought I’d check Tripadvisor for another local place. The map showed me that it was near to the previous nights venue so when I rocked up and they were next door to each other I thought that maybe there was something going on, similar good cheap local prices, generally great reviews on TripAdvisor for both, I had an inkling that they might even use the same kitchen but regardless the food last night was decent so I sat in and ordered a Cambodian red curry and beer which set me back a ‘whopping’ 4 dollars. Hard to beat value like that! 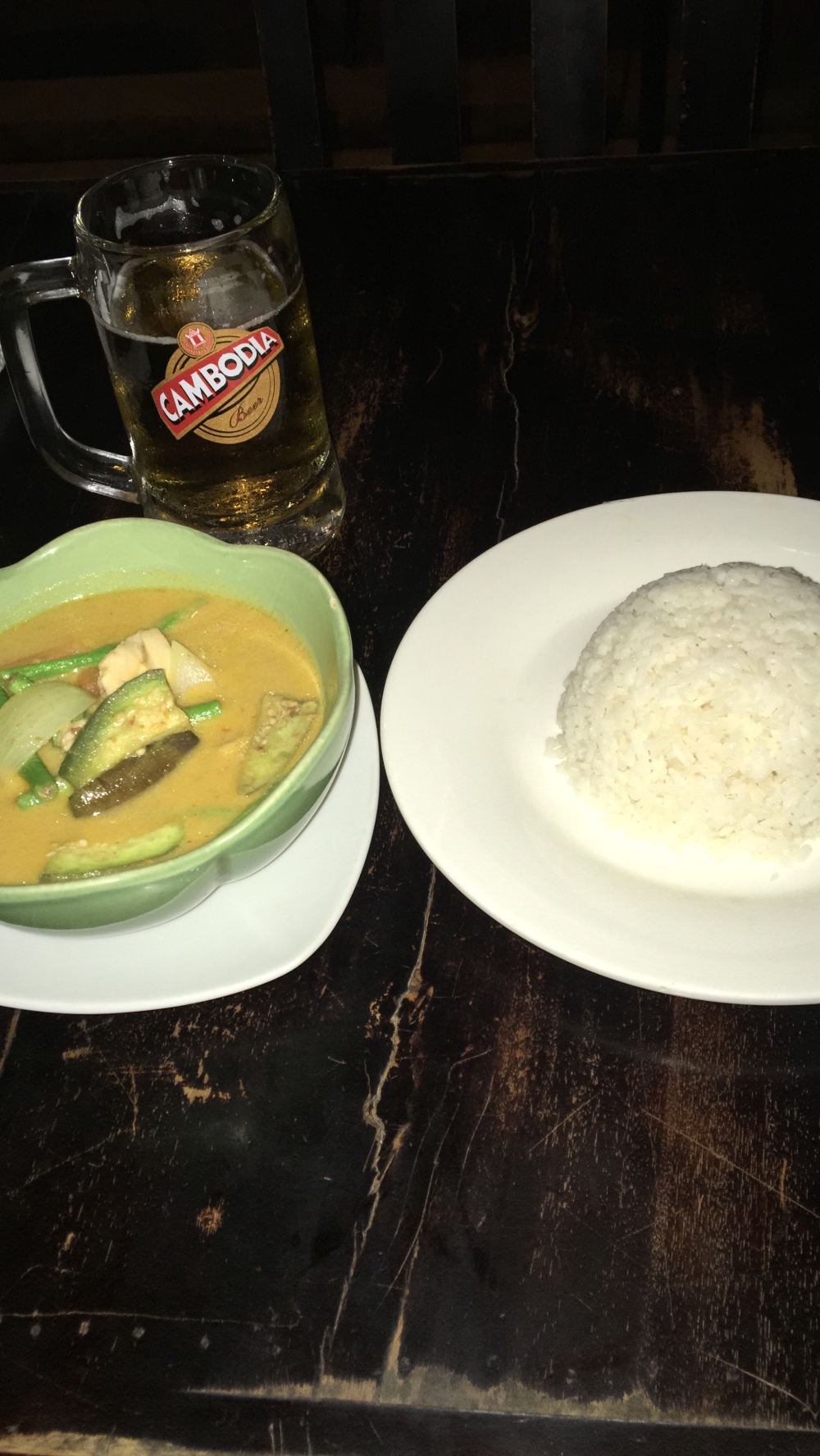 When I checked out earlier in the day, the hostel people told me I could use the facilities before I got my night bus to Siem Reap to catch my flight, so I headed back for a shower and rest in their common area.

As the time for the bus got closer, I double checked my ticket (luckily!) to see that I was on the 11pm and not 11:30pm bus that I originally thought, I scrambled my things together and I got to the bus at 10:45pm but when I did my usual wallet-phone-passport check, I couldn’t find my passport! Thankfully the hostel was close to the bus stop, I ran back to check if it was there. They had never given it back to me after check-in, I grabbed it and still made it back to the bus with 5 minutes to spare. Imagine if I got on the bus to Siem Reap and forgot my passport??! I was very lucky!! The bus was pretty smooth again and when I landed in Siem Reap, a 7 dollar Tuk-tuk was agreed to take me to the airport.

That’s another adventure done, for now!

Prices in US Dollars – Accepted absolutely everywhere. Easier to use the local currency even.

Visa for Irish Person 30 dollars (differs from county to country). Visa costs 2 dollars extra if you don’t have a picture ready for them to use.

Giant ibis overnight bus to Phnom Penh 15 dollars. This was the most respected/best quality bus company I seen on the net.

Kratie town (approx 8 hours north of Phnom Penh) – I wanted to fit this into my trip bus times didn’t really allow for it. If you want to see a picturesque town along the Mekong river, as well as the famous pink river dolphins, then try fit this into your trip.

15 dollars for Tuk tuk to killing fields and back