Just a few hours before I was meant to go to the airport, I got a text saying my flight was cancelled and that I was now going via Brussels instead of Morocco. It was no big deal but it was still strange going to a country I wasn’t expecting (even if it was just a stop over!). It made me want to book a random flight to a random destination last minute without planning sometime. It’s on the list.

When I arrived in Lisbon I got the metro from the airport to the area I was staying. Straightforward enough. I was staying in a really good area, right in the heart of where everything I wanted to see was. When I got to my hostel it was all closed so I thought I’d have to go find a new place to stay but as I walked back down the stairs two people were coming up that explained I needed a passcode to get in (I later realised I got an email at 1am the night before with the passcode, but who would know to check that!). Problem solved but not a good start. The hostel itself seemed to be under construction so there was no reception area and just one room where everyone stayed that was cramped. I only needed a place to sleep so I didn’t really care but I wouldn’t be recommending it to be honest.

Every corner you turn in Lisbon there seems be something to see, my walk to the hostel alone had me marking places that I was going to come back too.

If you are ever stuck for time and want to see a place, a free walking tour is always a good option. I got to my hostel at 3pm and picked up a walking tour of the Alfama region at 4pm. The tour brought us around the area which was destroyed by the massive earthquake in the 1700s. Stories go that the earthquake knocked buildings, churches for example, that had candles lit and went up in flames and the people fled to the water only for a tsunami to come in. Imagine the devastation. We winded our way through the area tasting the local custard tarts, taking shots of a local cherry based drink and learning of the local history in different parts. 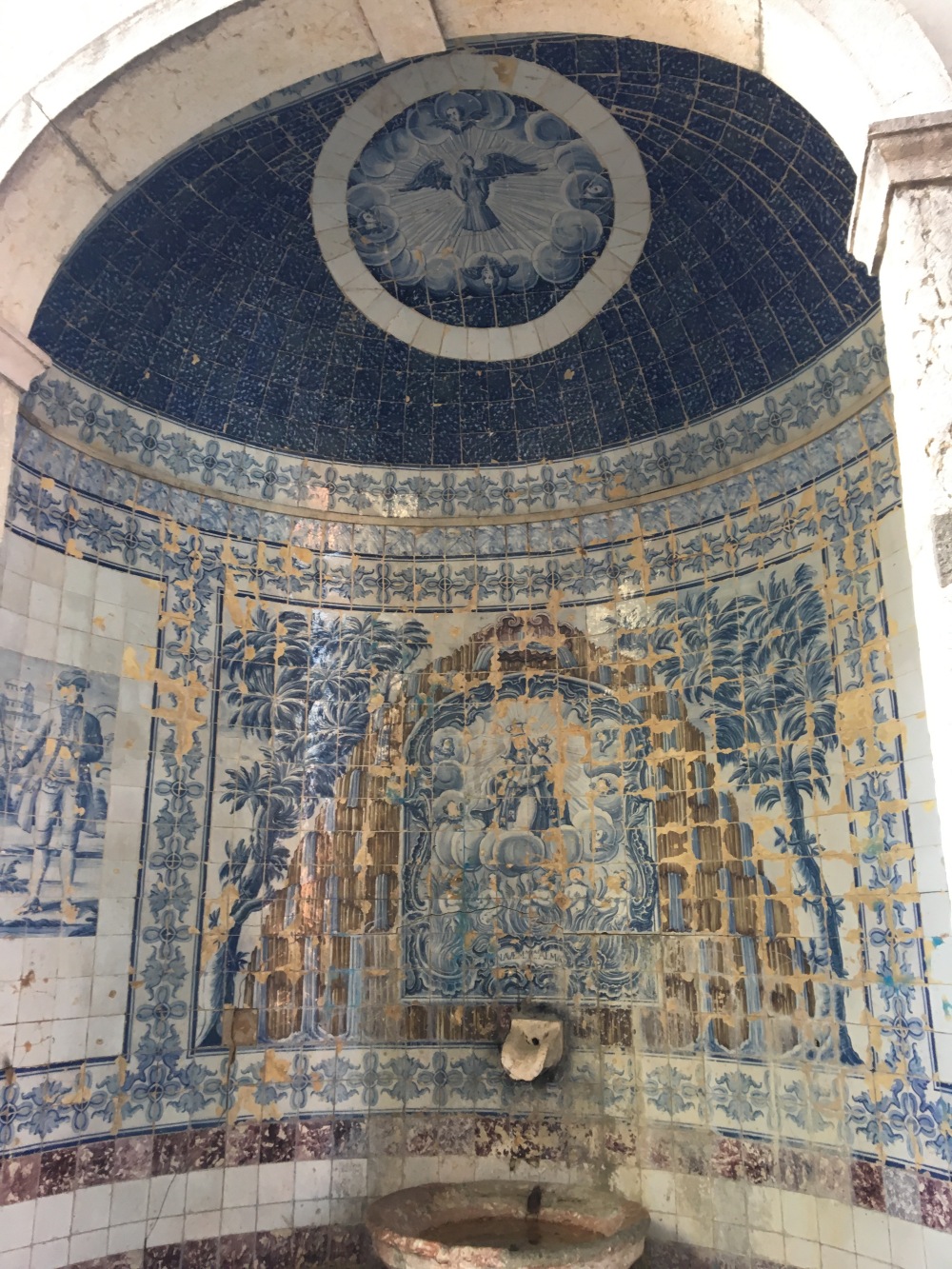 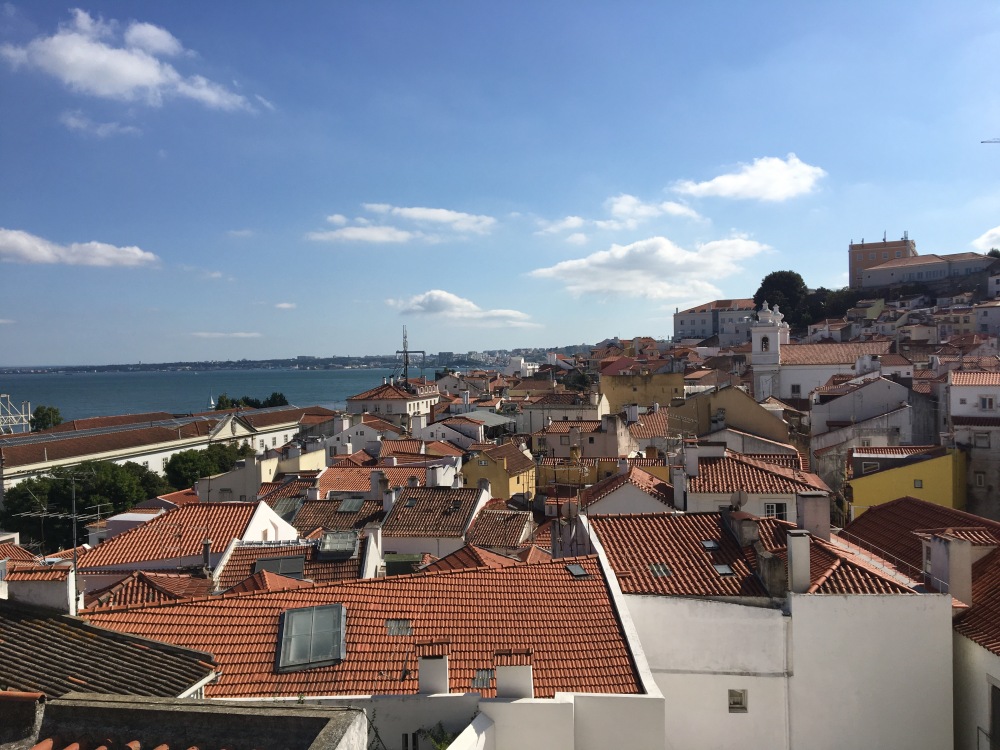 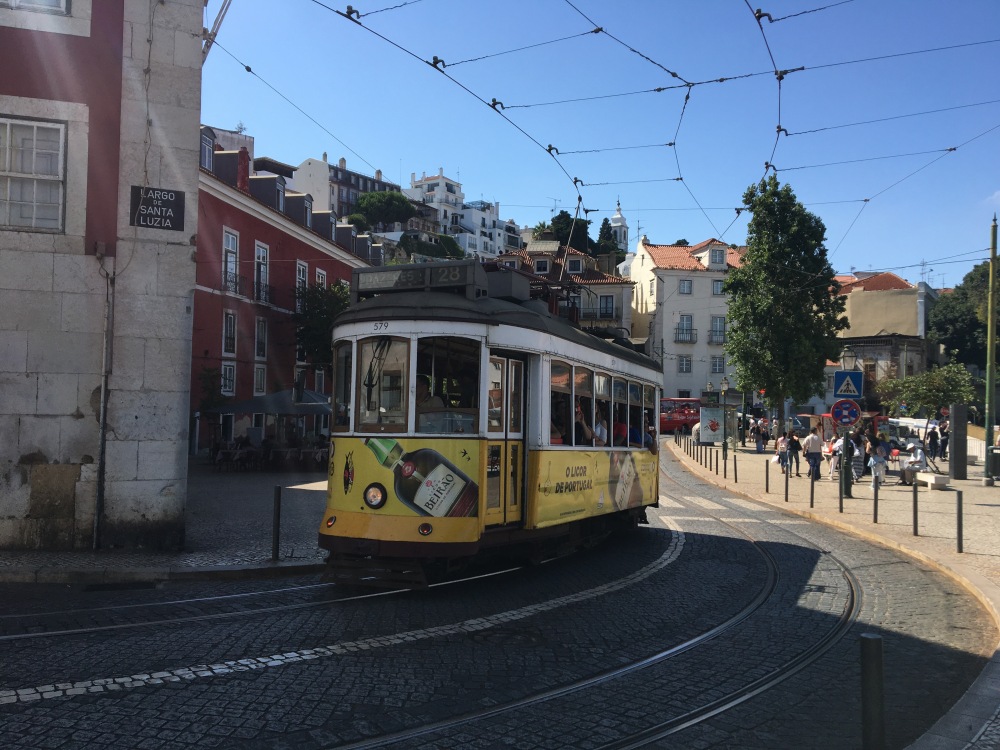 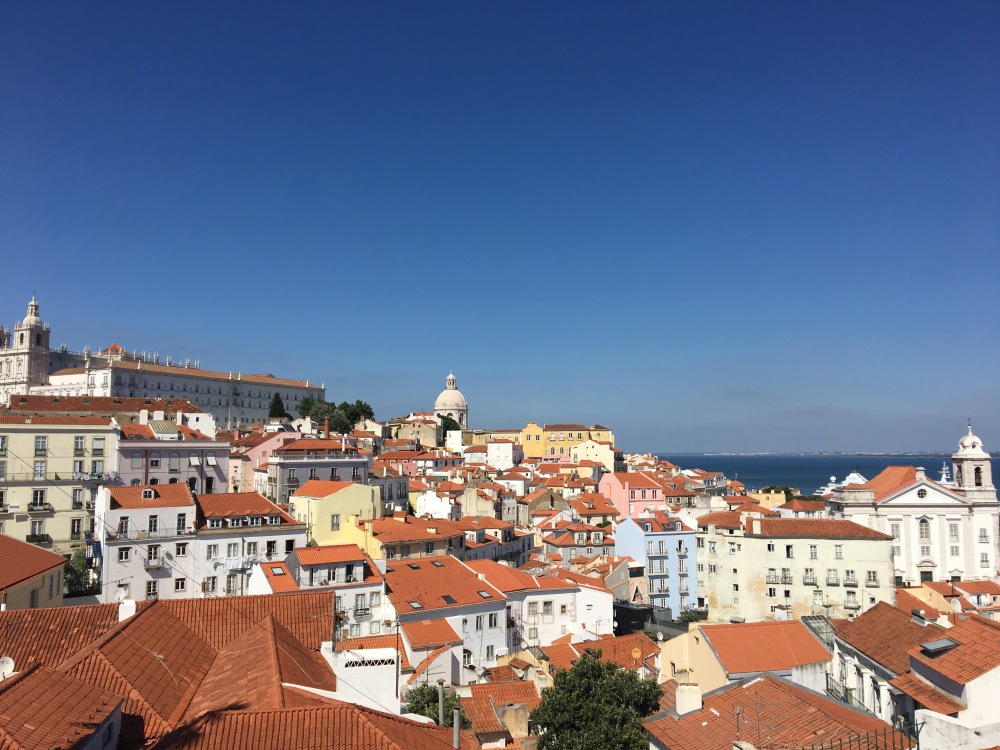 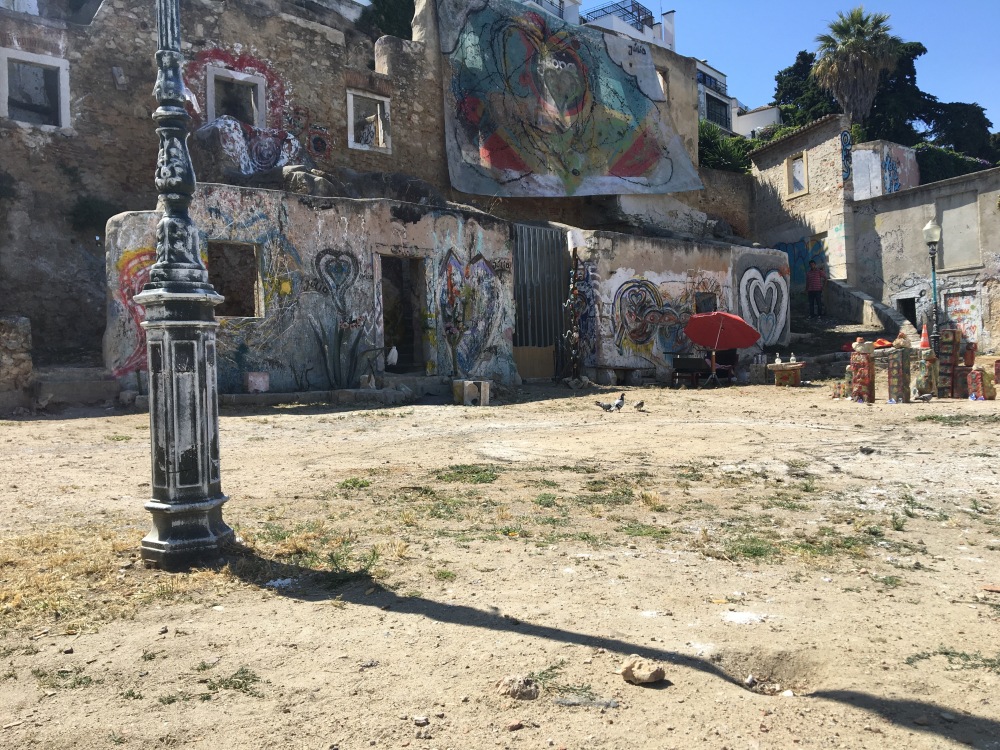 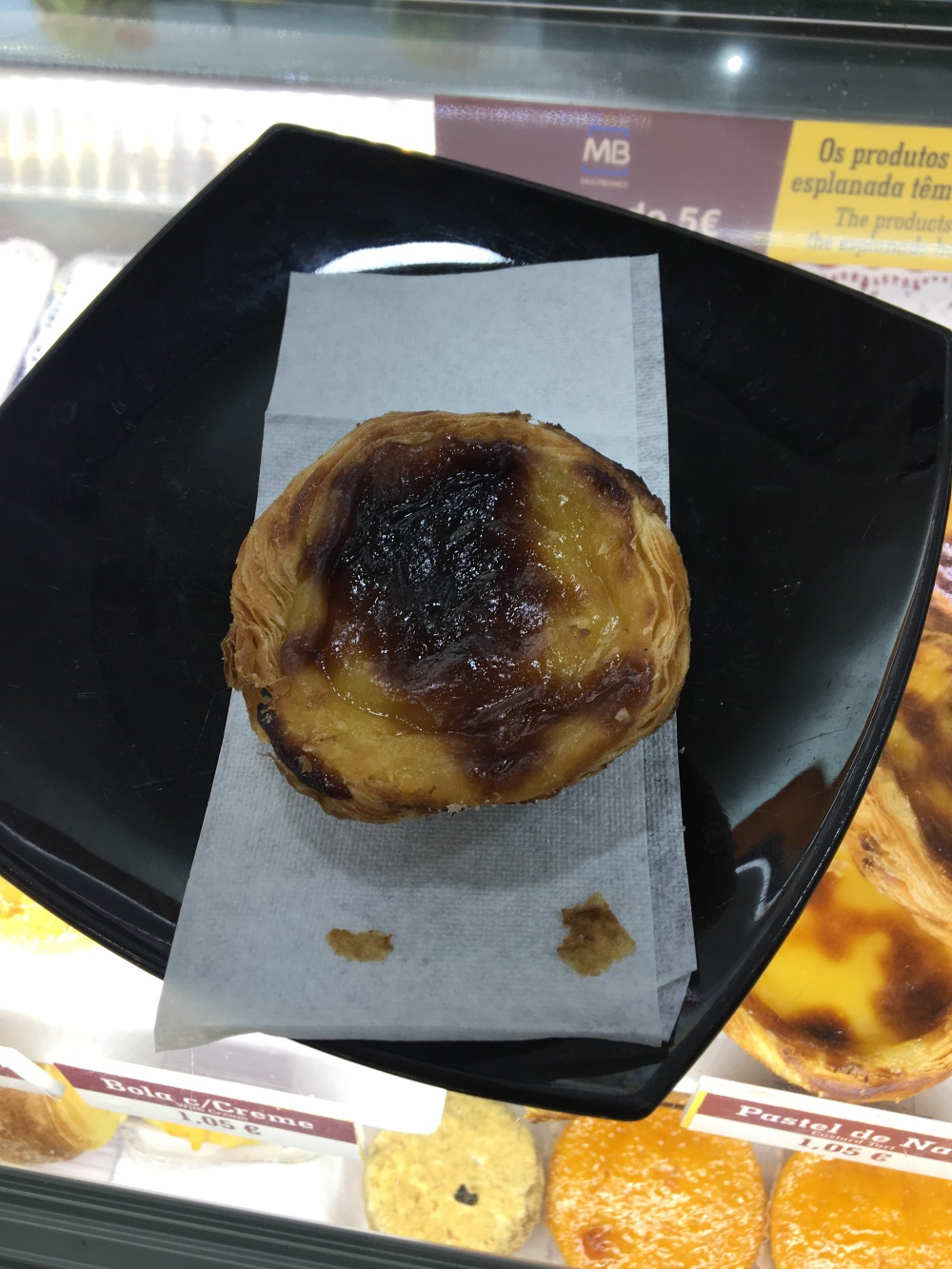 After the tour I set about finding all the places I wanted to see, commerce square, Saint Jorge Castle, the streetcar tram etc. before heading back to the hostel for quick rest and google where to go for food. I found what looked like a great choice on TripAdvisor about 1km from my hostel. I strolled down around 8:30pm, passing a lot of other street side restaurants, thinking they all looked good, before I found the place I researched. It looked busy, too busy, they were full so unfortunately didn’t get to eat in Taberna Sal Grosso but I had no problem stopping in one of the many nice places I seen on the way to that place. I stopped in a place near my hostel and had some cod fish cakes, roasted chorizo and then seabass for the main. It was all tasty and a bottle of beer only cost 1.85 euro, I was a happy man. I Finalised my plan for he next day (day trip to Sintra) while I sipped my Super Bock and watched the world go by. After that I grabbed an early night, as I planned on being up early to watch the rugby (Lions V New Zealand).

After the anti climatic finish in the rugby I got up and made my way to Rossio Train station (not to be confused with Rossio Metro station which is in proximity to it). I had read that trains regularly go from Lisbon to Sintra every 30 minutes but it appeared it was only every hour. Anyway I got my day return ticket and hopped on the 40 minute train. I was glad of my earphones for that one as the girl beside me on the train spent most of the 40 minutes in awe of her backpack that was green… no brown… no green… no brown… it was GREEN!

When you land in Sintra the most notable thing is the the place is thronging with tourists, and I know I can’t talk because I am one too, but there are really so many people there! With this there are also countless people offering tours for different prices but there is a local bus (434) that offers a cheap round trip ticket to all the main sites so that was the better option I thought although I walked to Sintra National Palace and Palacio da Regalaira initially before taking the bus to the much further Moors Castle and Pena Palace.

I didn’t go into Sintra National Palace because, to be honest, I wasn’t really aware of its historical significance and didn’t feel like paying money and wasting time walking around another building that didn’t entice me in. However, I did admire the views of Sintra town from the palace! 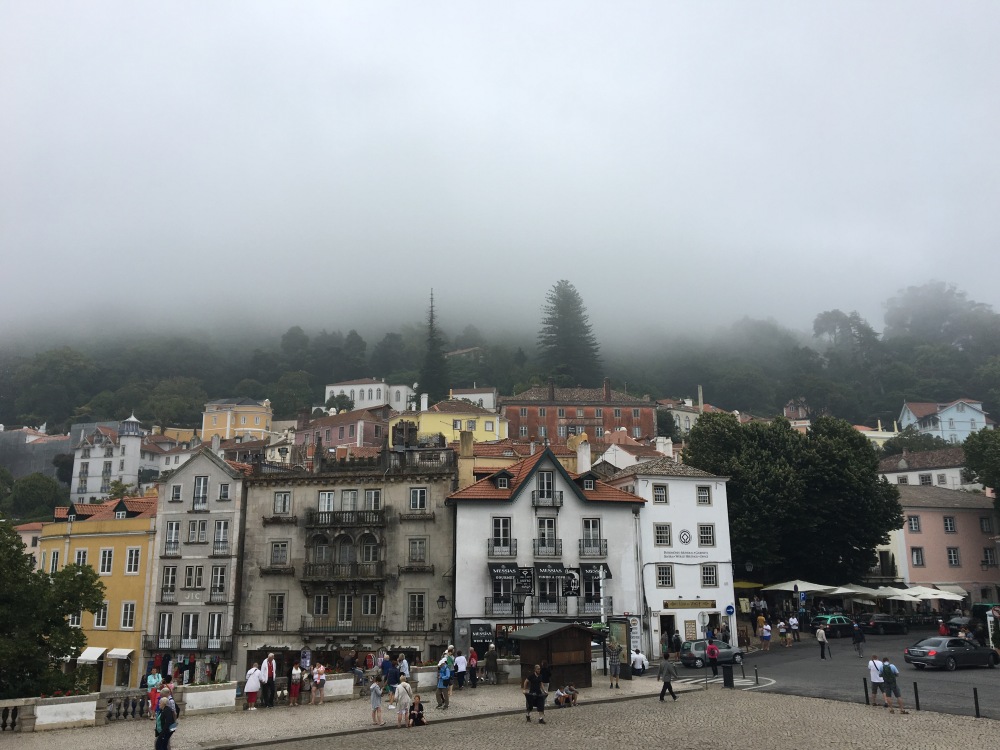 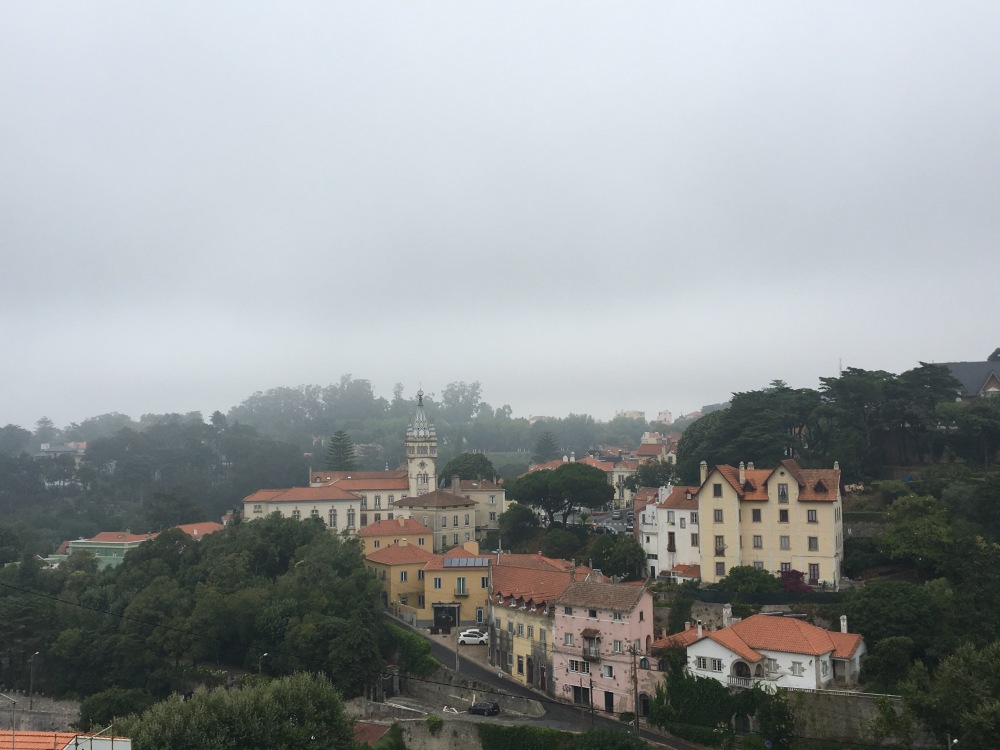 I walked to Palacio da Regalaira from there as I hadn’t quiet figured out the bus routes yet and it wasn’t that far anyway. This was somewhere I was keen to go as the ‘initiation well’ was an image I seen some time ago and always wanted to see it in person (although until some recent research I didn’t actually know it was in Portugal, let alone near where I would be!). This place was interesting, the grounds itself were a bit of a maze, with some underground tunnels too but I got the distinct impression that much of what was on the grounds was new and made to look as if it was old to match the wells and palace itself. I must say that the well was smaller than I expected but still I was very happy to see it anyway. The term well, is superficial only, and no water was ever there but it was used rather as an alter for sacrifices. The Palace building was impressive and the decor inside gave a real insight to the wealth that lived there. 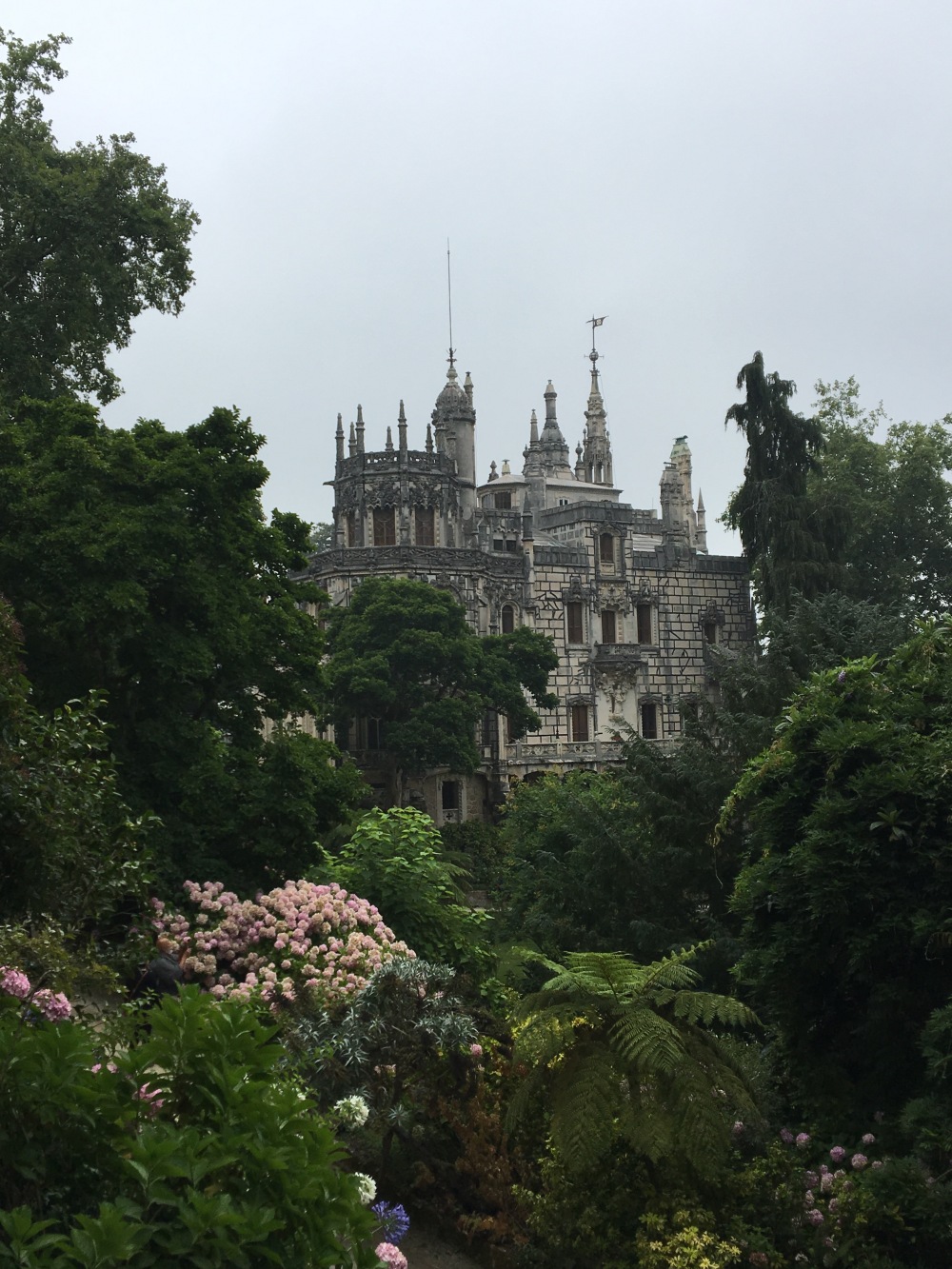 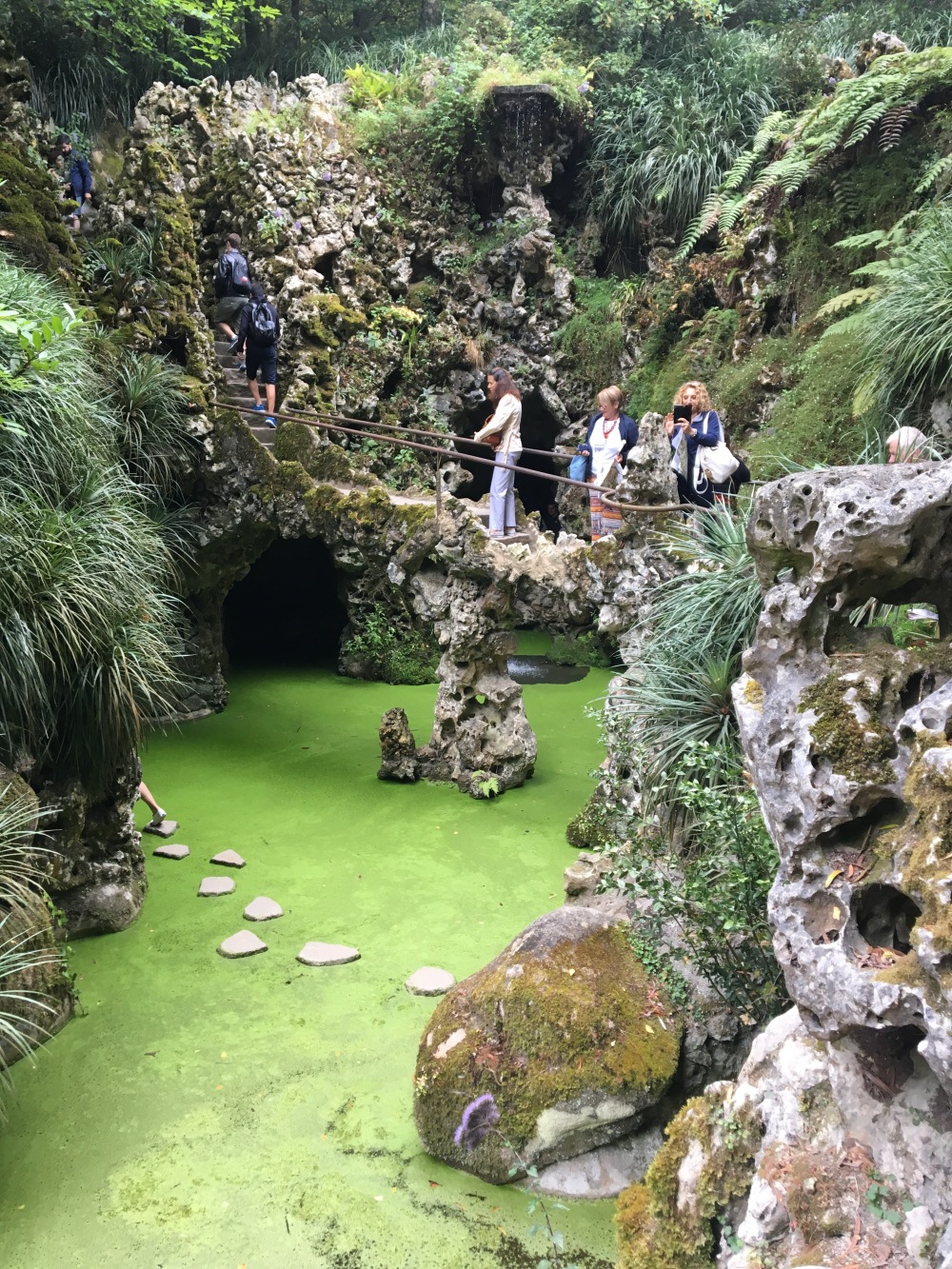 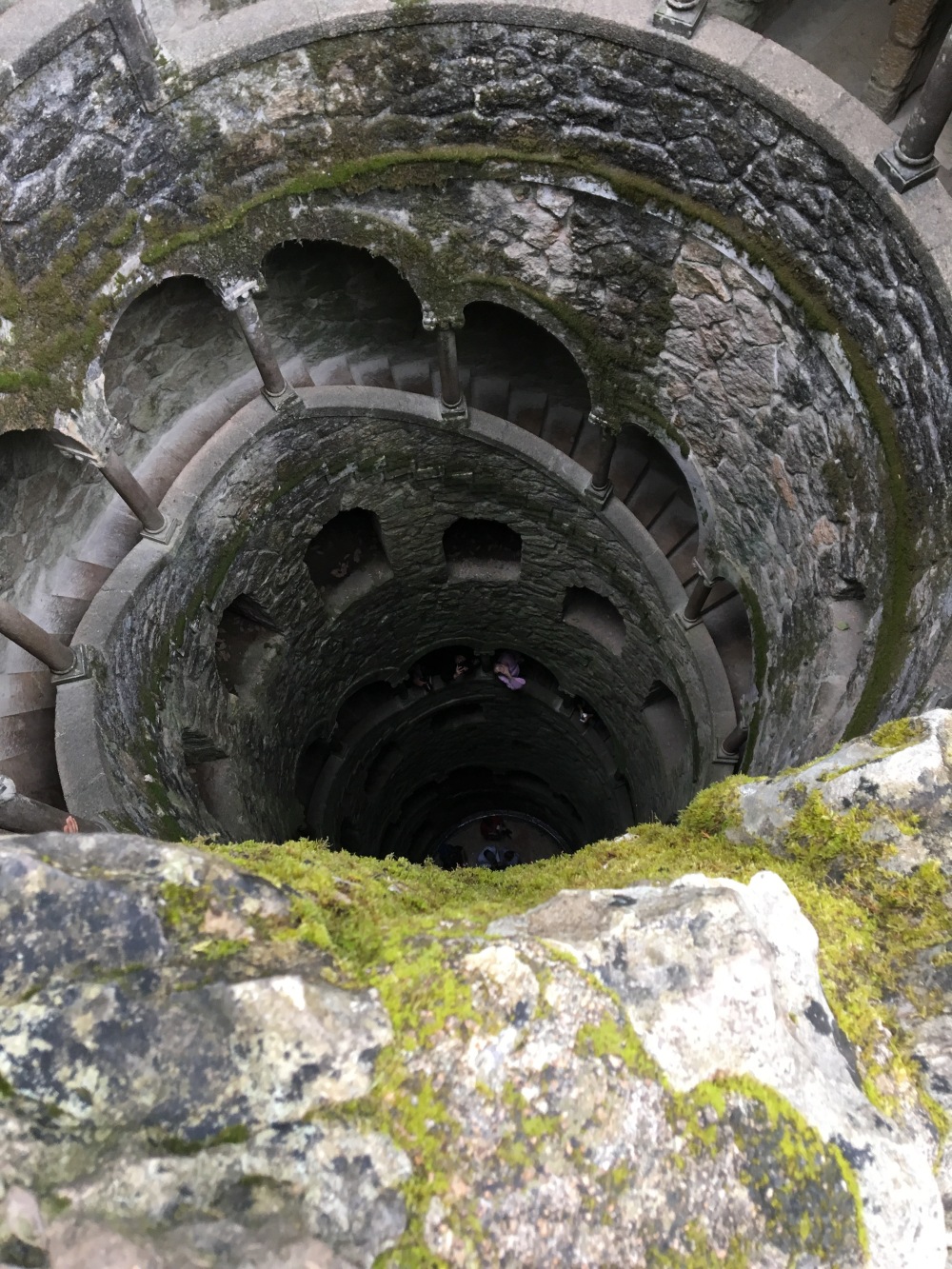 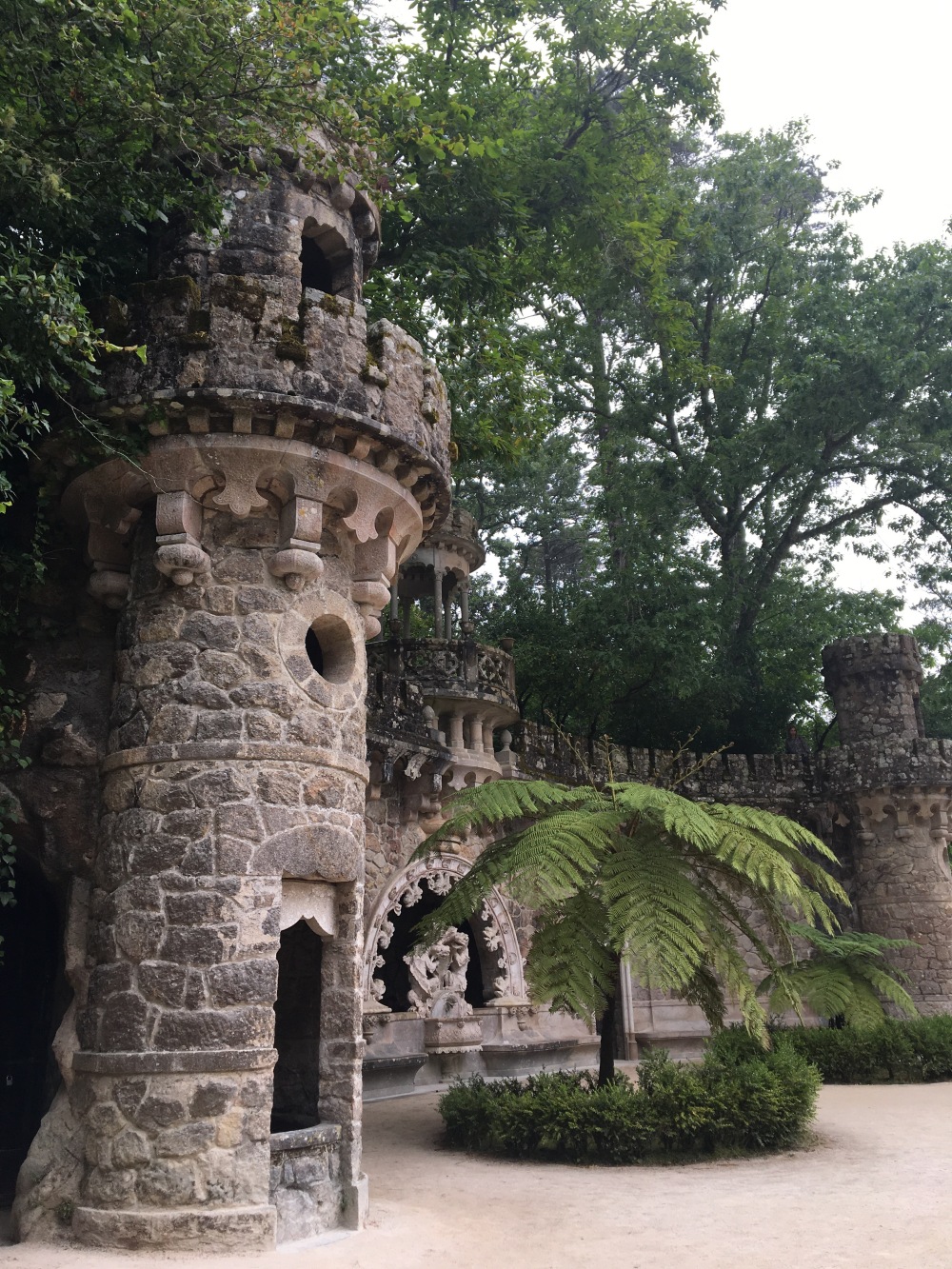 I knew I had to get a bus to the next stop as it looked way to far on the maps to be walking, especially since half the area is a mountain! I got off at the Moors Castle and although the clouds had come in (not surprisingly, a coastal town with hills everywhere) I think it added to it. Ok, I can only imagine the views on a clear day but being so high up completely surrounded by clouds gave a real historic feeling to the situation like you might see in a film. It really added to the situation for me but like I said from a picture point of view it’s hard to illustrate how cool it was. 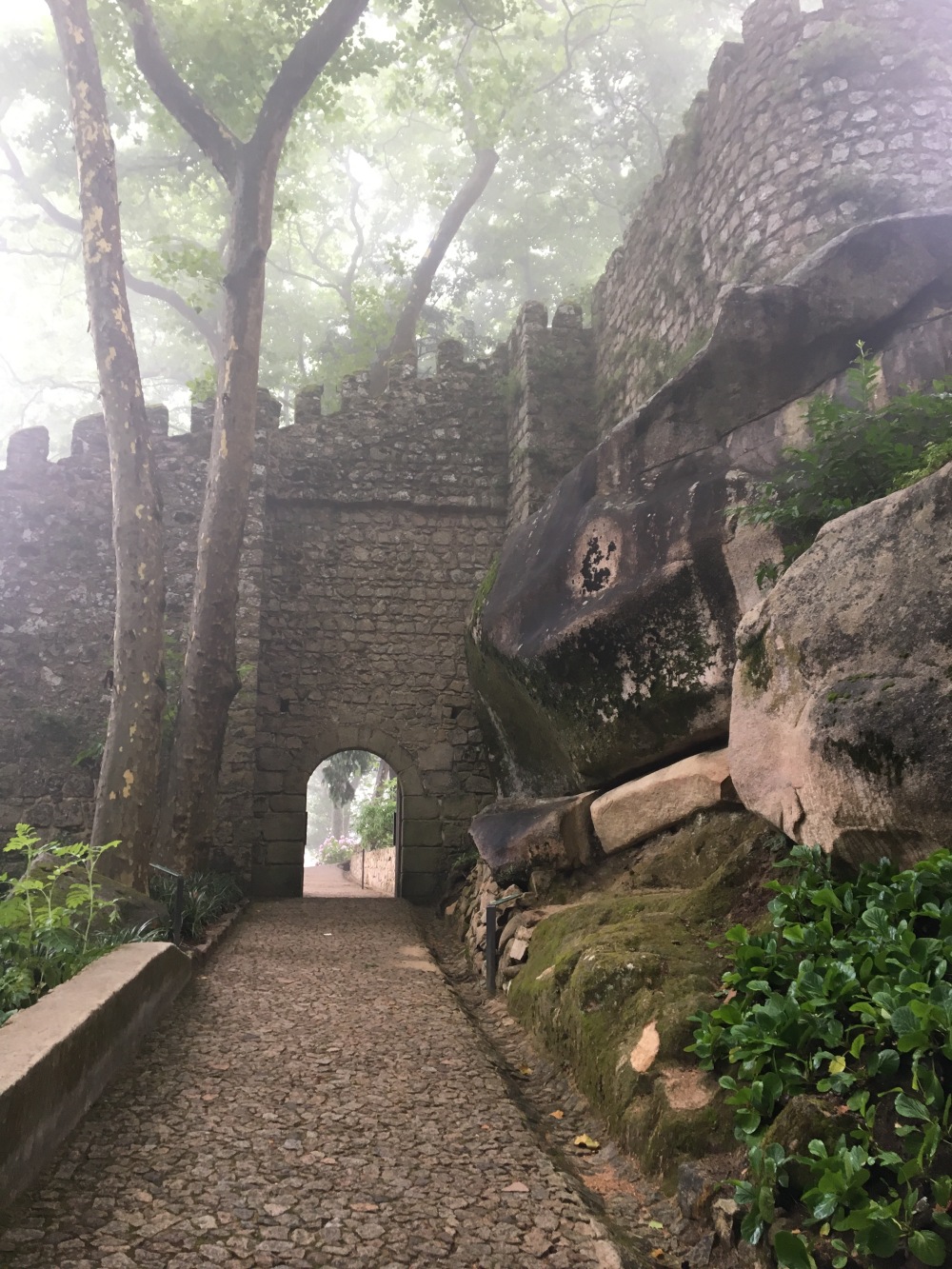 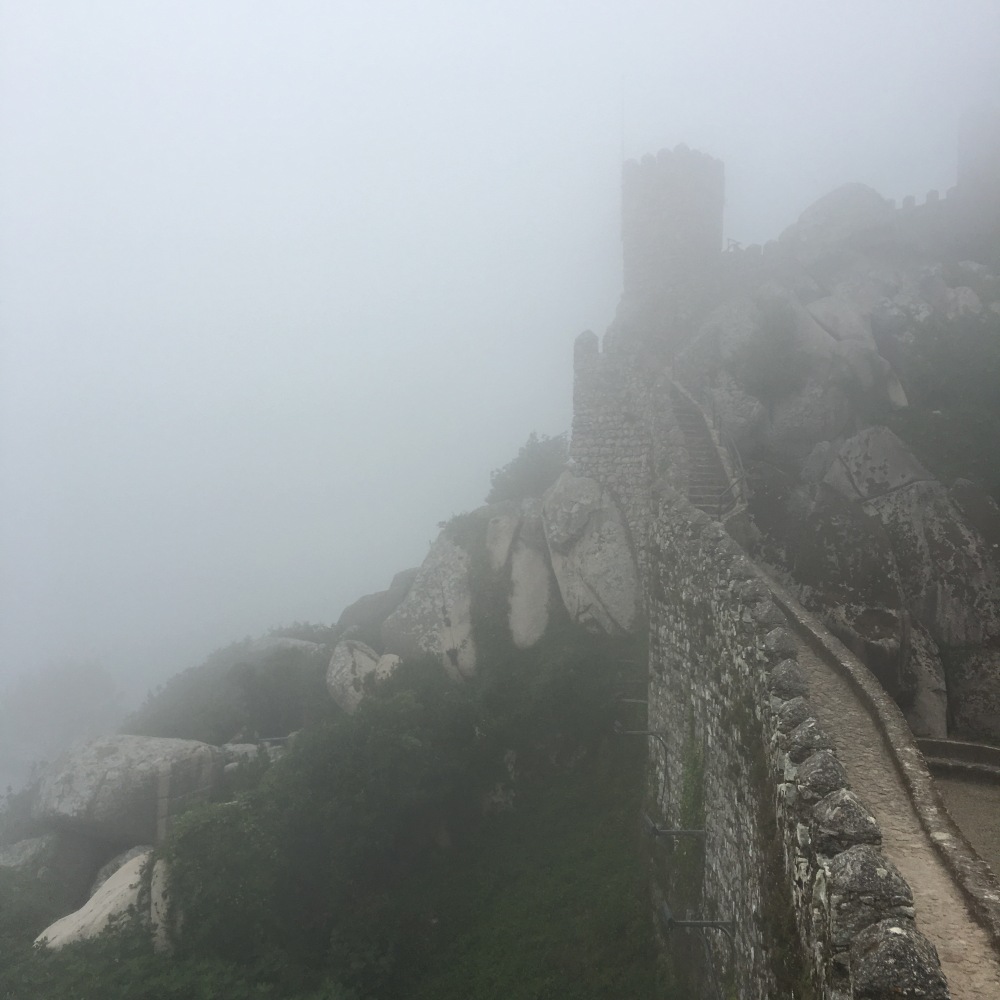 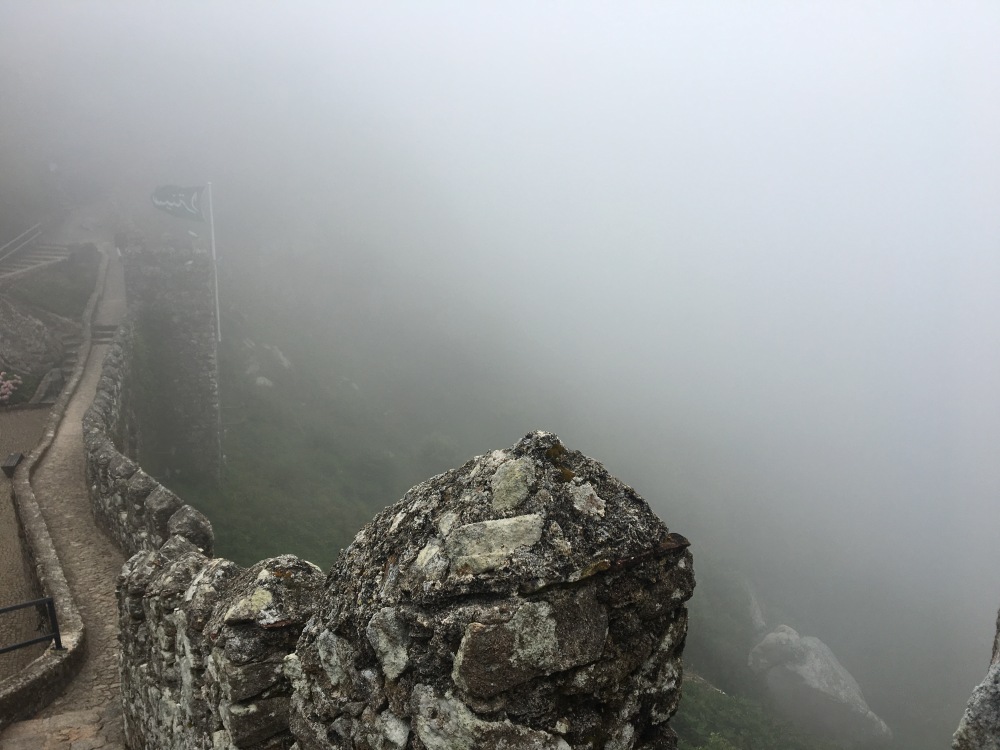 After the Moors I walked up to Pena Palace, you can get the bus but they are pretty close so I just walked. I knew they it might be hard to see the Palace with the clouds but I took the plunge and paid for the ticket to check it out anyway. It was nearly double the price of anything else in Sintra that I had experienced and for the Palace alone it definitely wasn’t worth it but the park it is situated in was huge and you could spend hours roaming around to get value for your money I’m sure. The only other part of the park I wanted to see were the lakes, which were nice, but that’s all they were. Pena Palace was my least favorite part of the day but at the same time I’m glad I did it or I would be wondering what it would have been like for sure. One part of the Palace had a very interesting gargoyle type feature over the tiled arch which to me was the only interesting part of the Palace. 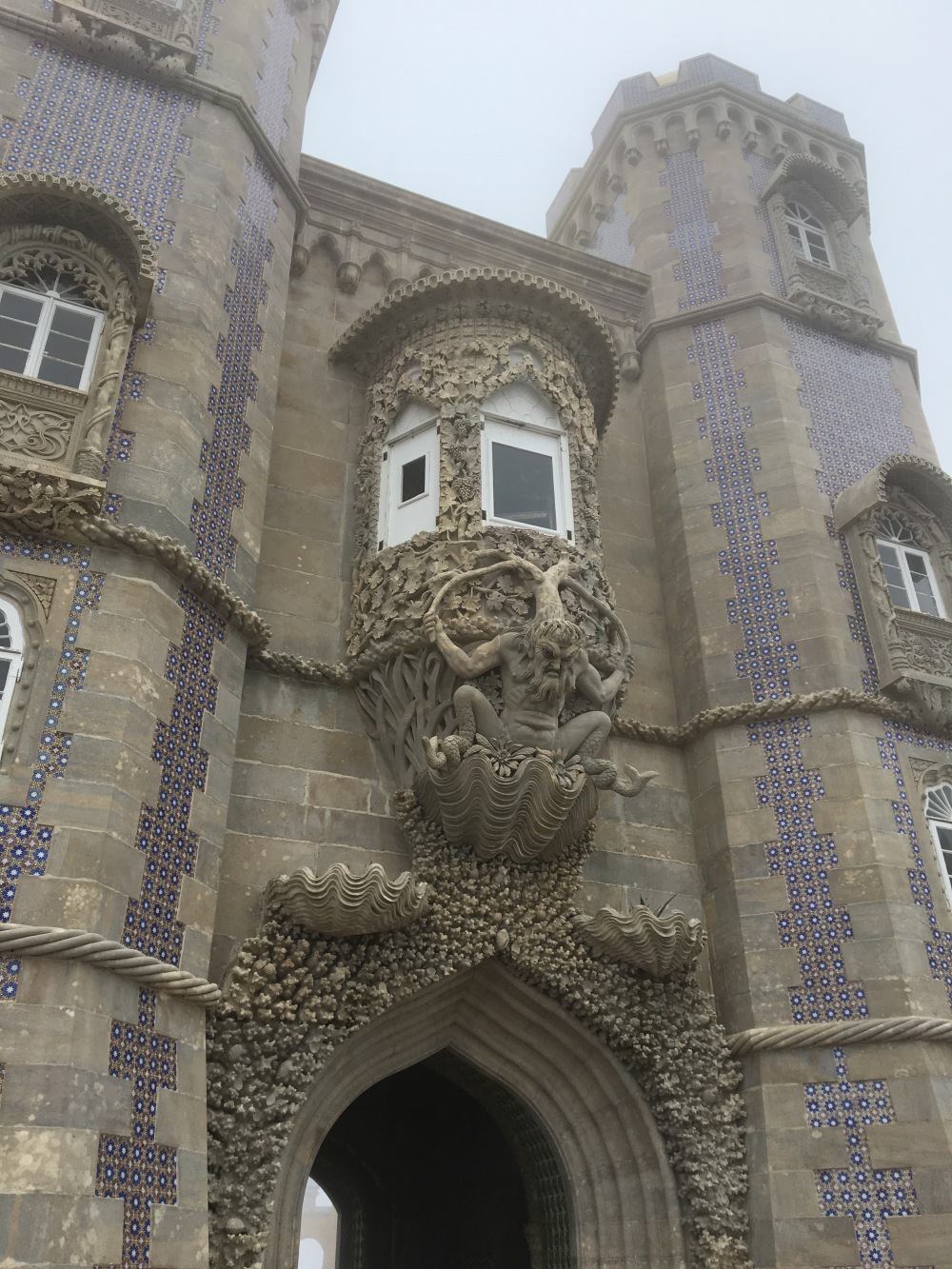 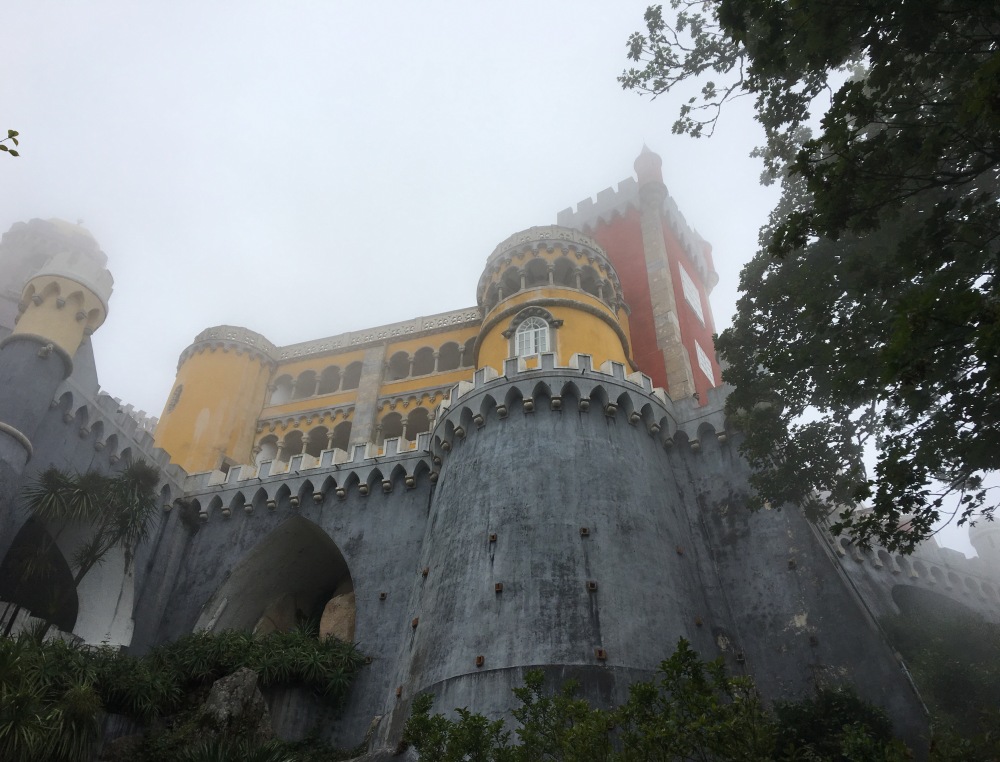 Apparently the tiled feature on buildings became a more popular thing after the fires in the earthquake in Lisbon as tiles burn at a higher temperature and were a more durable facade were such instances to occur again.  In Sintra or Lisbon you will see vast amounts of buildings covered I tiles, among other designs! 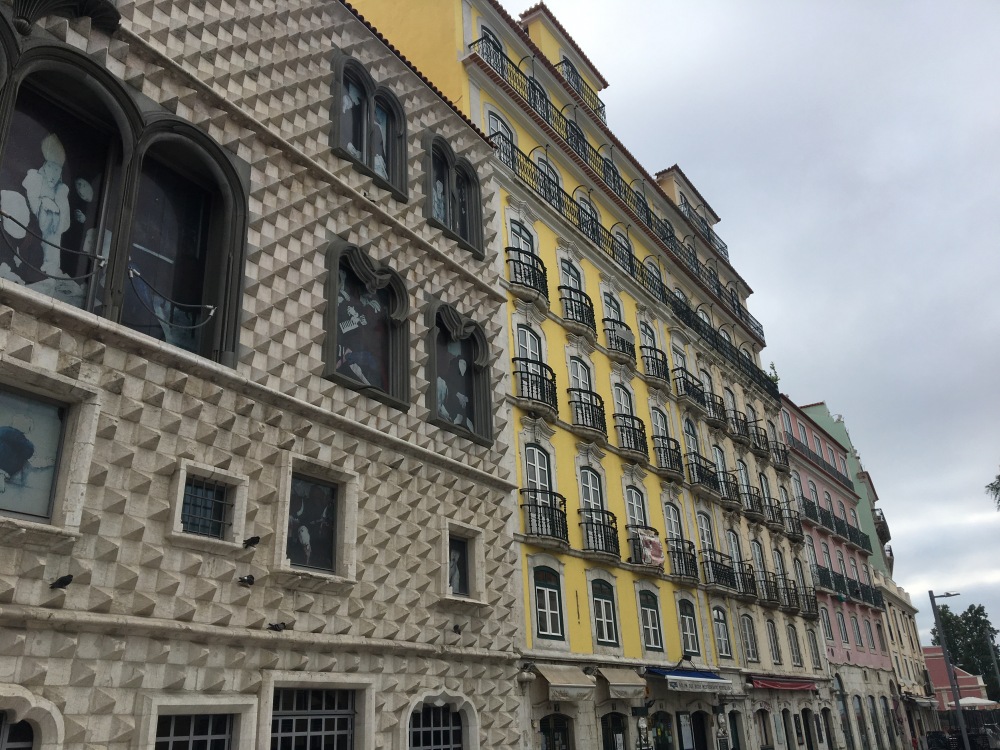 After a more peaceful train journey back to Lisbon I went back to the hostel and went to get a shower. The hostel was really weird. It was tidy and clean don’t get me wrong but it was so cramped and there never seemed to be anyone working there so I couldn’t find someone to rent a towel from and I had to rob one from the clothesline haha! After that I just went to another random nearby restaurant and had some food and sangria before getting an early night.

The next morning I had a train to catch, south to Albufeira. I had already bought my train tickets online (in doing that it is mandatory that they post them to you – processing and shipping fees are not nice!), but what I realized when I got to the station was that even though you had purchased your ticket, it is an open ticket so you still have to go to the ticket office so they can assign you a particular seat. When I got there I was informed there was only first class seats left… great how much would that set me back on top of what I’ve already paid!? It turns out it was only 5 euro and I got free WiFi and comfy seats for the 3 hour journey so I wasn’t complaining.

5 days of relaxing on the beach and by the pool with maybe the odd drink, here I come!

Albufiera was where I met up with Helen for a relaxing 5 days. It’s the type of place that you could just stay around your hotel and head for the main strip at night or you can explore a bit more if you want. We were located about 10 minutes walk from the main strip but we decided to try a bit of everything and went to Olhos de Aqua one night for a more relaxed family environment, we went to Albufiera Old Town to check out the day and night life. It’s a nice place that’s for sure. We chilled out by pool most days but checked out the old town beach and beach near our hotel on a couple of days too. If I was going back I’d stay in Old town for sure but for the younger people the main Albufiera strip area would be best I think and Olhos de Aqua for a family. Drink and food is relatively cheap but like any of these coastal get away towns it caters for everybody so if you want to go cheap or steep there are places to go! 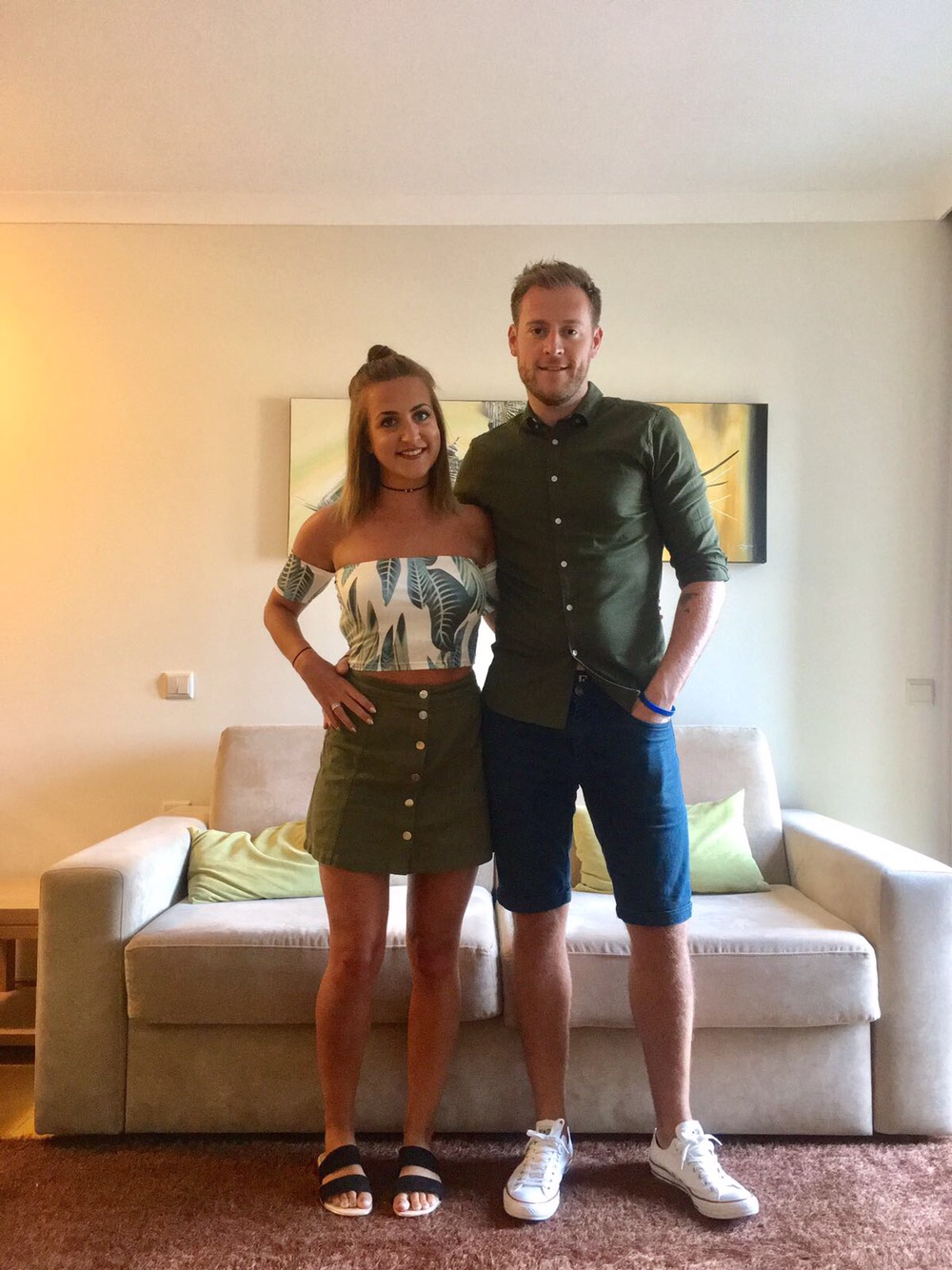 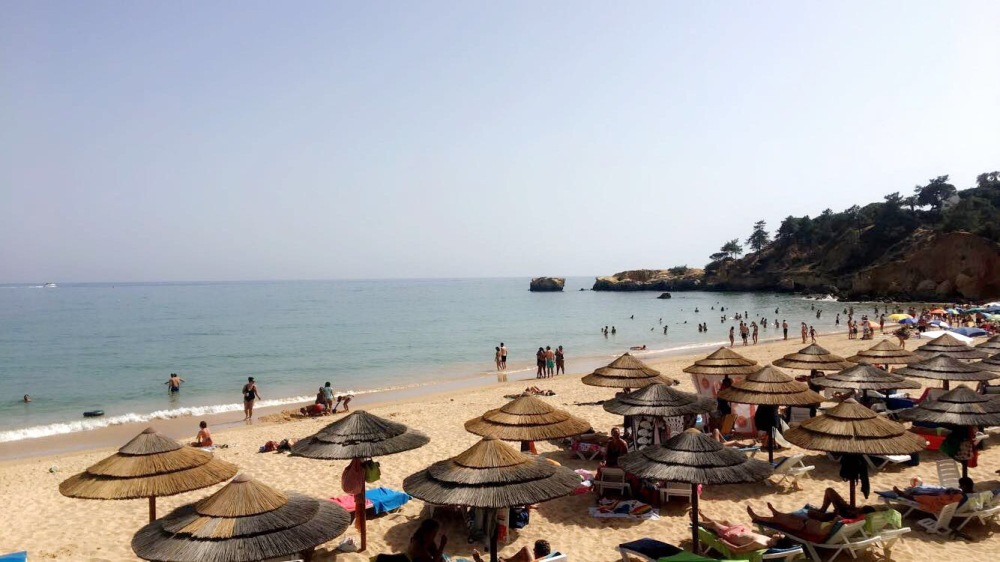 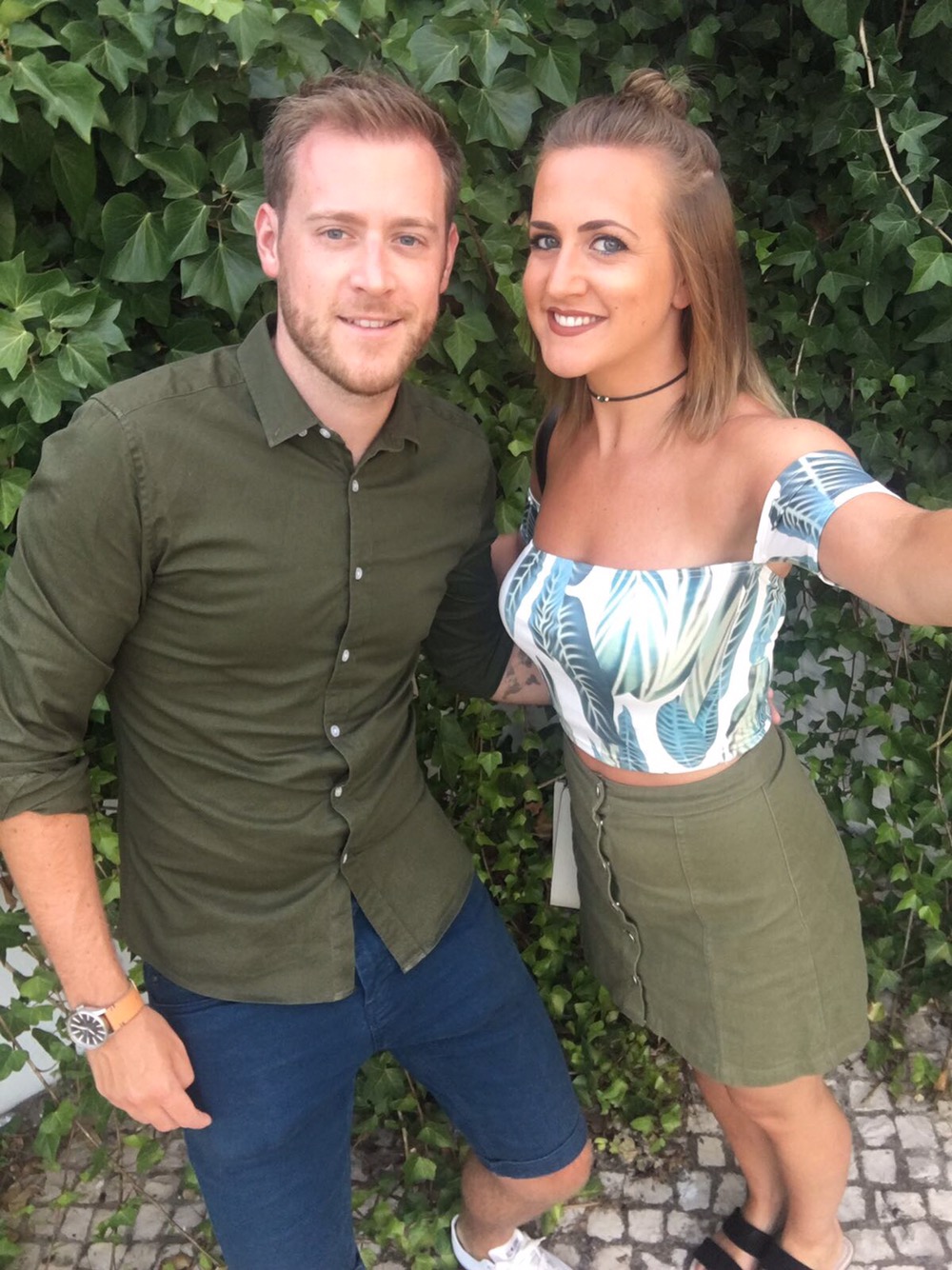 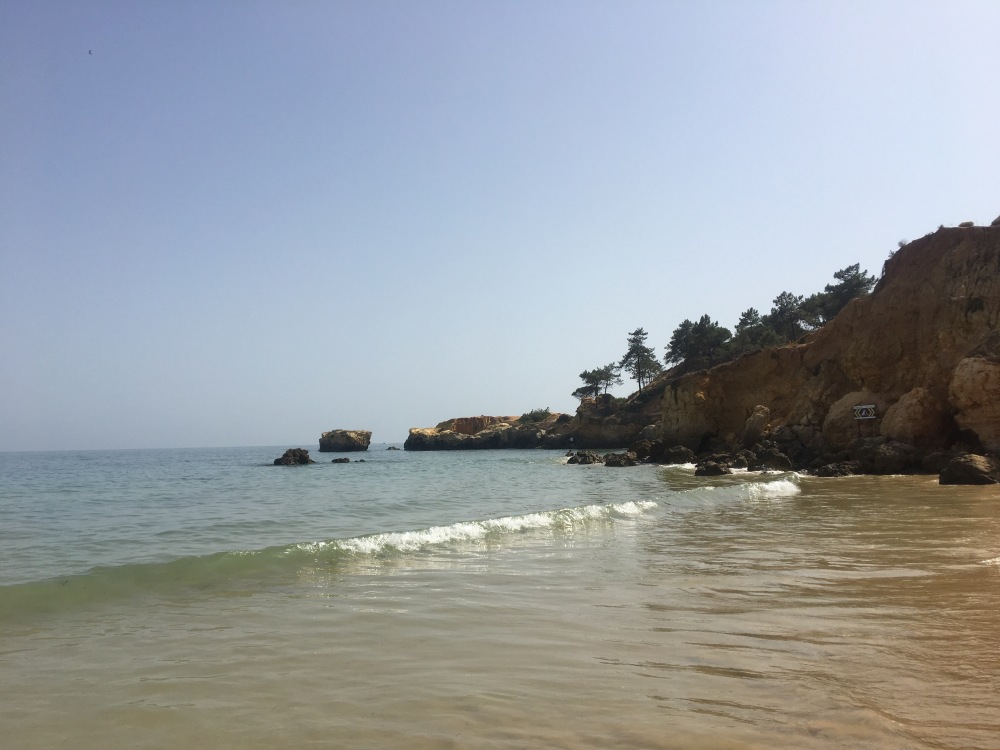 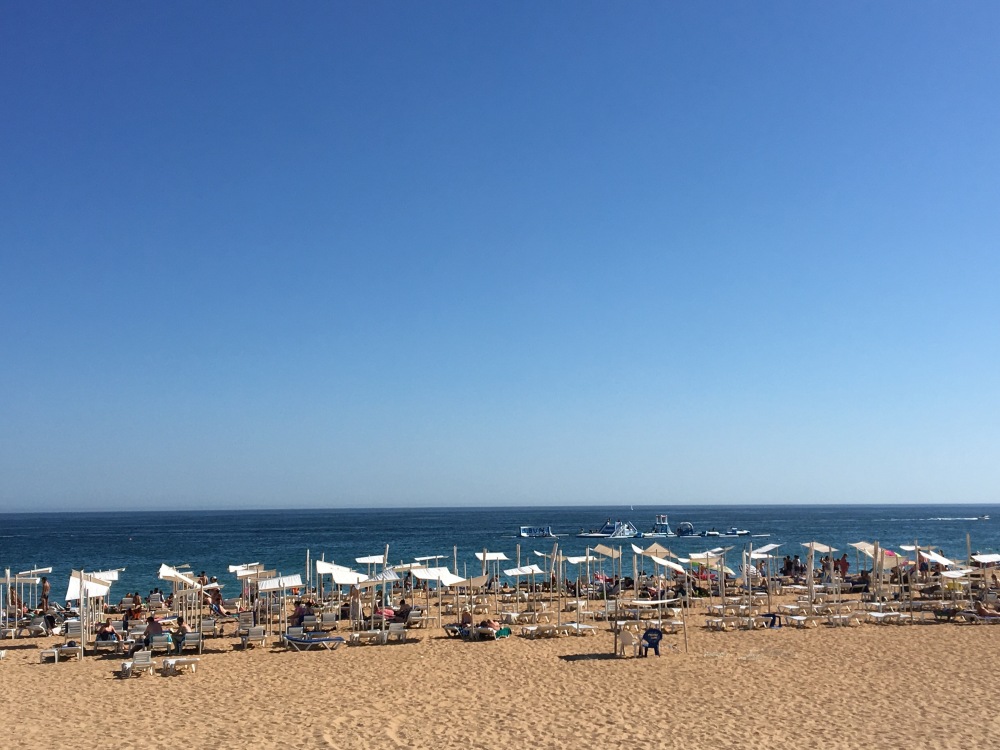 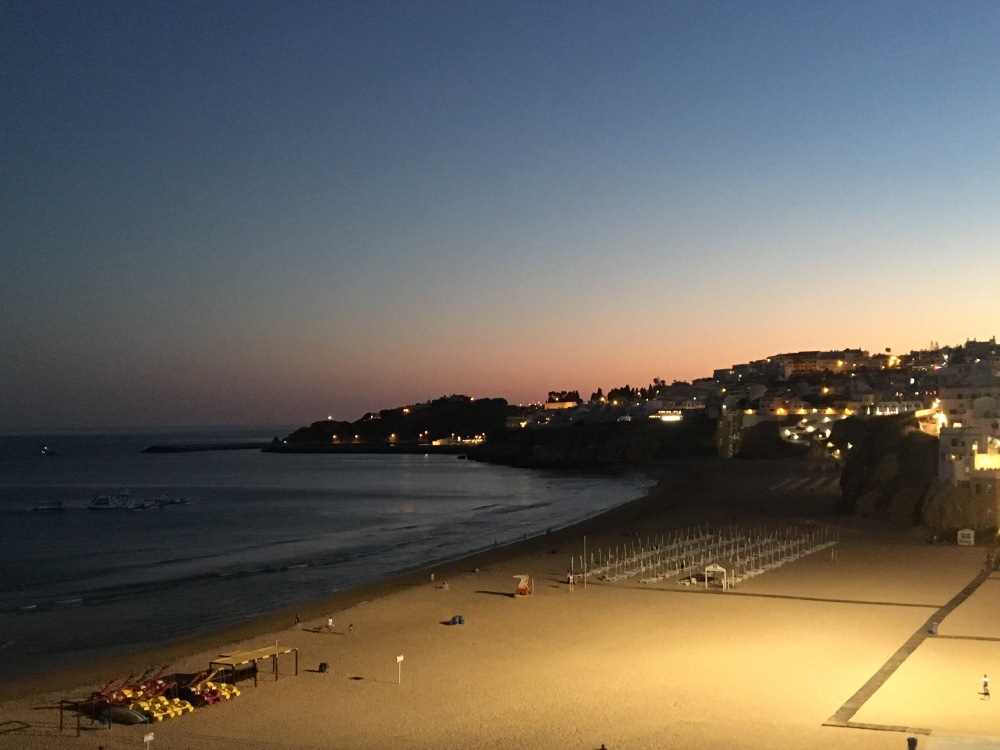 Train to Sintra 4.90 return from Rossio Train station (not to be confused with nearby Rossio metro) 40 minutes

Tip: If you exit Pena Palace at the lake side exit, you will skip the large queues of peeople at the main entrance to the palace waiting to get back to the town.

Park and palace of Pena 14

bottle of beer in restaurant 1.85 ( even less in a shop surely!) so it’s not a hard decision to make haha