We arrived in Cusco after a long journey from Nasca (via Arequipa) in the evening. 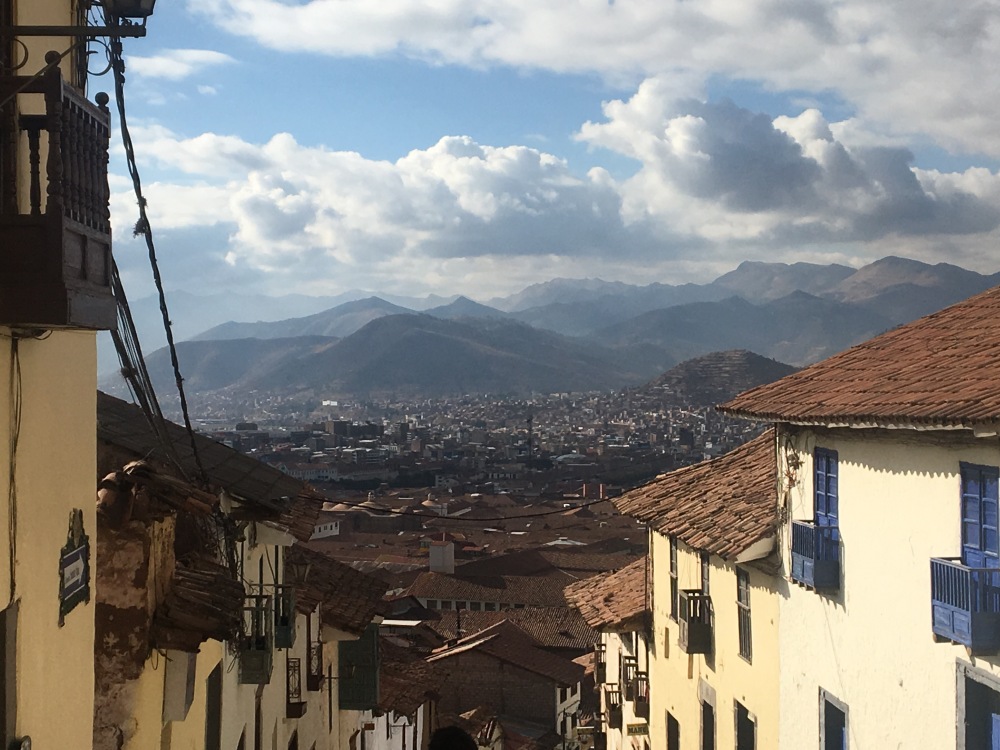 We knew what tours we wanted to do and how we wanted to do them because we were on such a tight (I don’t recommend this) schedule. So after checking into the Wild Rover Hostel, we asked them about where we should go to get ourselves sorted. To our surprise, and delight, they had a tour agency located in their hostel so we went there and got set up. We booked our 2 day, 1 night Macchu Pichu tour and our Rainbow Mountain day tour there and then. Job done. That was easy.

We got some food, and almost won a quiz but lost horribly, in the hostel bar (cheap food and great quality – highly recommend) and then grabbed an early night, or so we thought, as our pick up was 7:30am. The stench in the room was awful from some guys boots and to make it worse he came back drunk and got sick all over the bathroom before sleeptalking all night. Not great preparation for the day ahead but shit happens. I got what sleep I could and set off in the morning for Macchu Pichu.

I’d like to sit here and say that our tour was amazing bla bla bla but the reality is that it was organised extremely badly (which is apparently common for these tours). Don’t get me wrong Macchu Pichu was a sight to behold but the tour was meant to go as follows:

Transport, meet guide, go to hostel, meet guide later for dinner, sleep, meet guide in morning, go to Macchu Pichu, get guided tour, return and get transport back to Cusco.

Transport dropped us off at place without telling us where to go. From talking to others we knew we had to follow the train tracks. When we got to meeting place there was no sign of guide. He was late and smelled of drink. He brought us to hostel before we were meant to meet him for dinner later (he was late then too). He eventually brought us to dinner and left us saying that he would be back (I had a lot of questions) but he didn’t come back. The next morning we were meant to check out and meet our guide but our hostel wouldn’t let us leave without paying even though it was meant to be included in our trip. (We got the money back when we went back to the agency in Cusco but that’s besides the point). We were to then meet our guide to get our tickets. He didn’t show up. Another guy, who didn’t speak English eventually showed up, and after a struggle we got our tickets. We queued up for the bus (long queue!) and just as we were about to hop on, our guide walked by!! We had it out with him and he said a guide would be waiting at the top for us. When we got to the top we couldn’t find the guide so had to do the tour on our own. That didn’t bother me but we had paid for the guide… Afterwards we hiked back and made our way back the tracks to meet our transport but we only knew what time it was leaving by asking others. The set up was a complete joke.

Anyway, with the rant over, here is the nice version of Macchu Pichu. Everyone has the notion of getting up first and getting great pictures before everyone else arrives but I had heard this attitude is a waste because it’s usually cloudy and you won’t be able to see damn all. I can say from personal experience that I agree with this and on top of that, there are always people there – trying to be beat the crowds isn’t really a worthwhile excercise. As it was cloudy when we got there we went exploring. There are other elements such as the Inca Gate and the Sun Gate.

By the time we got back from exploring it was starting to clear up. We sat down and enjoyed the view as it got better and better before it got to a point where it looked like this: 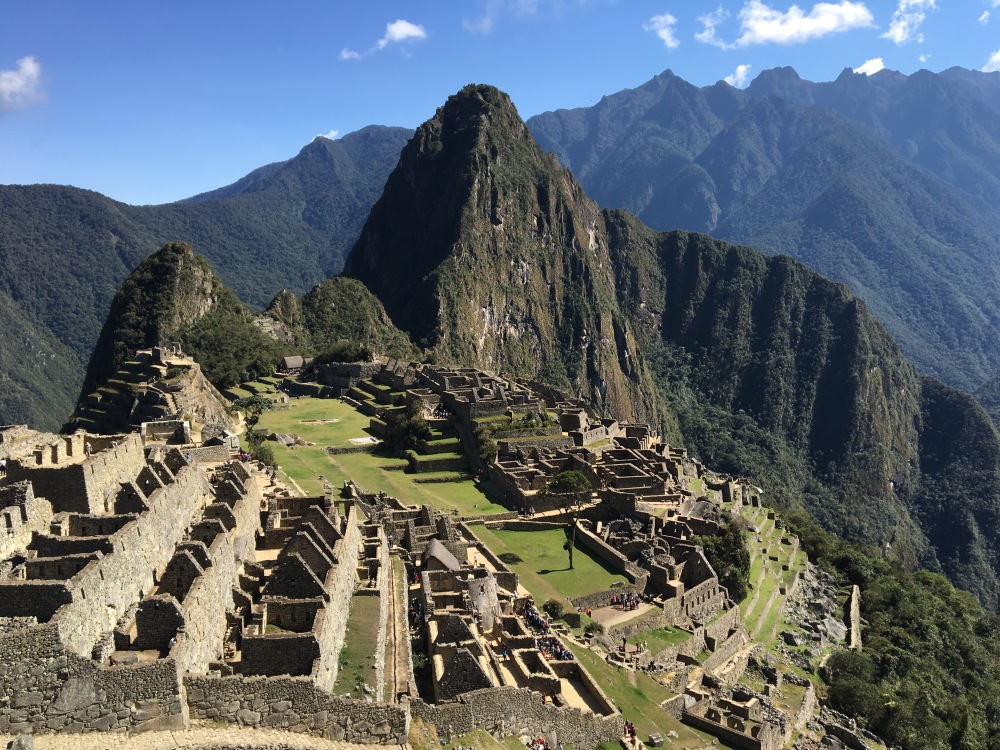 When we first arrived I wasn’t that impressed to be honest but as the day cleared up it was a lot easier to appreciate the beauty of the area. After sitting in awe for a while we had a walk into the city ruins itself to see how it was laid out. 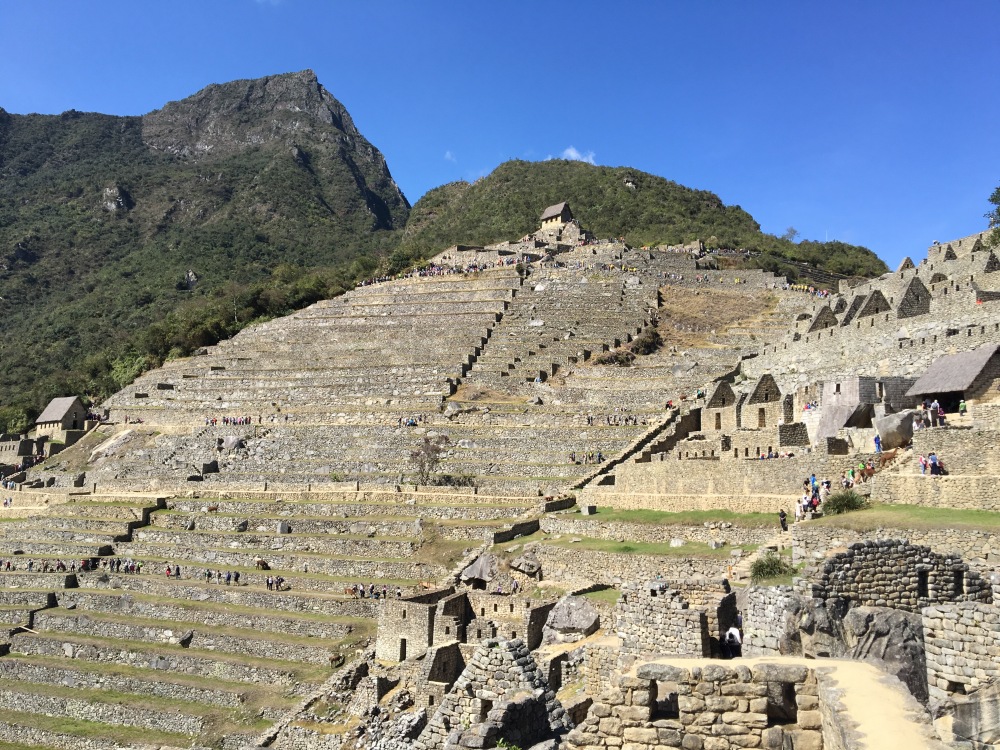 It really makes you wonder what life was like back then. We hiked back down and took a little break, dipping the feet in the river by the train tracks, before making our way back to the bus at hydroelectrica.

The minibus takes seven hours to and from hydroelectrica to Cusco. Not a pleseant experience but the other option was to get a really expensive train. I guess that comes down to personal choice. To be fair, the views on the bus were amazing although some parts of the road made me wonder what death road in Bolivia had in store because I couldn’t imagine it being any different to that.

Of our two tours we opted to do Macchu Pichu fist because the altitude was lower than Cusco. I’ve never really had any problems with altitude but I was cautious of Paul’s first time exposure to the heights of rainbow mountain. Cusco is at a level of 3,300m and our bus from Hauchachina brought us to a height of 4,400m at one stage.

So I thought he would be ok but just incase, we did Macchu Pichu, at a height of about 2,800m first.

It was a pity that our tour was so badly organised but it takes nothing away from Macchu Pichu itself. I’m delighted I’ve been to yet another place on my ever growing bucket list and next up is the most recent addition to my list, Rainbow Mountain.

Wild rover hostel. Great hostel, newly renovated and good party bar. Rooms are far enough away from the bar not to hear the noise so you can have the best of both worlds. 35 soles. Breakfast included.

Peru hop doesn’t drop people at hostels in Cusco but organised a free taxi for us.

Our Macchu Pichu tour was $115 US dollars. We got unlucky with the tour guide but I’d imagine this is the standard rate for tours.

Everyone is different but make sure you take your time to acclimatise before doing tours. If you are ok in Cusco you should be fine for Macchu Pichu as its lower but if you are doing some of the treks (Inca/Salankay etc.) give yourself time to acclimatise.

If you want to organise your own trip to Macchu Pichu (I.e. Not a package deal like we got), from what I hear, expect to pay 50soles each way for transport, 50 soles for accommodation in Aquais Calienatas, 128 Soles for machu pichu ticket, bus up/down to Macchu Pichu if you don’t want to walk is $12 US dollars each way. But you would be wise to give yourself a day or so extra incase anything goes wrong.

Machu Pichu is lower than Cusco so don’t think you need really warm clothes. If you are fine wearing X in Cusco you will be more than fine Macchu Pichu.